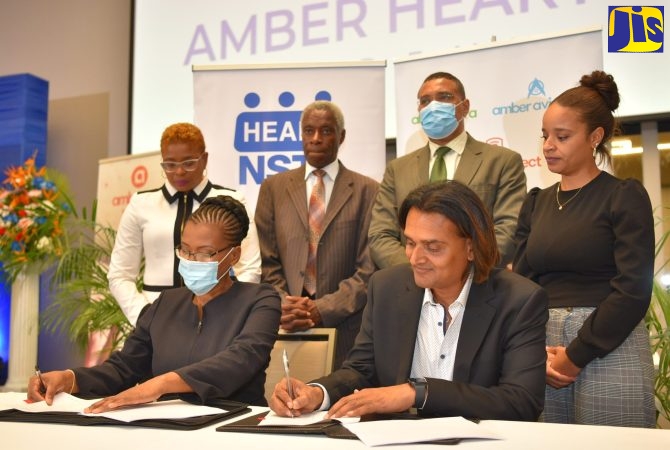 An initial 500 students are expected to begin training in software design and programming starting October, at the Amber HEART Institute of Coding.

The Institute, which will be the Caribbean’s first dedicated to coding, will equip young people with in-demand technology skills.

A Memorandum of Understanding (MOU) has been signed between the Amber Group and the HEART/NSTA Trust to formalise the establishment of the Institute, which follows the successful pilot involving 100 young people under the Amber HEART Academy.

The signing took place during the ceremony for the first cohort of graduates under the Academy at the AC Marriott by Kingston in St. Andrew on June 1.

Prime Minister, the Most Hon. Andrew Holness, who witnessed the signing, hailed the initiative as revolutionary, noting that it aligns with the digital transformation thrust being pursued by the Government.

He said that the partnership between the Amber Group and the HEART/NSTA Trust, represents innovative thinking in training and development, and aligns education to industry needs.

Founder and Chief Executive Officer of the Amber Group, Dushyant Savadia, said he was encouraged by the success of the pilot, to invest further in the country’s youth.

“Today, I stand so proud that this pilot of 100 youths – half of them are still under training, who will complete in another three months – has been so successful and has been groundbreaking. At Amber, this gives us the confidence and courage to invest even further to start the Caribbean’s first Amber Institute of Coding,” he noted.

The Chief Executive Officer informed that the 500 students will be immersed in a 12-month programme at the campus-based Coding Institute, for which registrations will open soon.

“From early October… we will onboard 300 residential youth and 200 who can commute to the campus every day and study coding, and in a year’s time, we will graduate them like all of these folks here,” he said.

The successful graduates of the pilot are now NCTVET-certified and have been employed by the Amber Group, Digicel, and National Commercial Bank.

Mr. Savadia implored other businesses to come on board. “Just as NCB and Digicel have opened their doors to the students coming out of the Amber HEART Academy, [we encourage you to] integrate them in your businesses and help us to develop a First-World nation,” he urged.

“We have the blueprint right here. We are actively training and certifying our workforce to transition to higher value-added jobs. We have trained problem-solvers; therefore, the private and public sectors must utilise this new generation of skills to innovate, create and lead Jamaica with technology,” he added.

The Amber HEART Academy was officially launched on January 14, 2021. It is the brainchild of Mr. Savadia and is a partnership with the HEART/NSTA Trust, the Housing, Opportunity, Production and Employment (HOPE) Programme and the Art of Living Foundation.

The first batch of graduates were immersed in an intensive six-month programme taught by a team of highly qualified master coders from the Amber Group, followed by a six-month internship programme, where they developed software programmes, alongside senior developers.