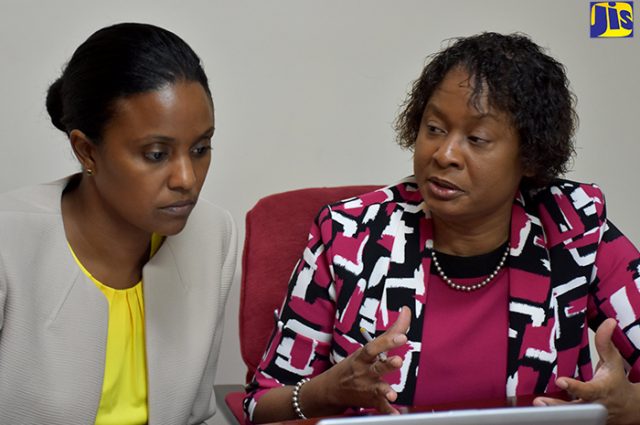 This exercise, when completed in 2019, will bring the number to 317, following last year’s certification of the first 17 of the approximately 2,700 early childhood institutions in operation.

The ECC’s Acting Executive Director, Karlene Degrasse-Deslandes, tells JIS News that 100 institutions, with an enrolment of approximately 10,000 children, are being targeted under the initial phase of the current certification exercise, which commenced last September and is scheduled for completion in August this year.

She says the agency is in the process of completing the certification of 22 of the 100 institutions shortlisted from 183 identified island wide.

Mrs. Degrasse-Deslandes says these schools have attained between 90 and 99 per cent of the certification standard requirements, adding that the remaining 73 institutions’ state of compliance ranges between 70 and 99 per cent.

She tells JIS News that the factors and considerations influencing selection of the 100 institutions included, inter alia, the outcome of inspections detailing schools’ operations; and operators’/practitioners’ willingness to work with the ECC in implementing the Standards.

She notes the significant interest generated among practitioners/operators following last July’s certification of the first 17 institutions.

“We received a lot of calls from persons querying (how they too could get their institutions certified). So we sought to engage those initial institutions/practitioners displaying the greatest interest,” she points out.

The Acting Executive Director says the ECC, thereafter, reviewed each institution’s inspection report, adding that working in tandem with the entity’s inspectors and development officers, “we were able to choose the 183 schools and, from that, to get the 100.”

Mrs. Degrasse-Deslandes indicates that subsequent to finalizing the selections, the ECC undertook work to identify areas of institutions’ operations deemed in need of strengthening.

Notable among the focus areas was the need for more structured training in financial management and corporate governance, as well as heightened stakeholder awareness regarding child abuse and paediatric first aid, among other stipulations under the ECC Standards.

In this regard, she says several training sessions were staged for a number of practitioners.

These include money management training workshops for persons in parishes in the ECC’s Regions One and Two. Region One incorporates Kingston and St. Andrew, and Region Two – St. Thomas, Portland and St. Mary.

“We will next be going to Region Five, comprising the parishes of St. Elizabeth and Manchester.

We have increased our drive to ensure that the Standards are user-friendly, so that persons can understand what they need to do to get their institutions certified,” the ECC Acting Executive Director points out.

Mrs. Degrasse-Deslandes says the ECC’s certification fairs have been pivotal in assisting practitioners, operators, parents and other stakeholders to better understand the Standards.

She explains that the concept, which was introduced ahead of the start of the 2016/17 academic year, last September, replaces the back to school fairs previously held which, she notes, focused only on general preparations.

“This (2016/17) year, we decided on a change. Based on the mandate of the new Board (of) having 100 ECIs certified by August, it meant that we needed to change the way we went about doing certain things,” she adds.

In this regard, Mrs. Degrasse-Deslandes says the annual exposition’s theme was revised to focus on heightening awareness about the 12 Standards, with emphasis on the performance criteria under each.

Two fairs have been staged so far. The first was at Jamaica College in St. Andrew in August, and the second at Lynch Park, Portland, in October. A third is slated for St. Elizabeth in February.

Mrs. Degrasse-Deslandes says the feedback from both partner stakeholders and beneficiaries to the fairs as well as the overall certification programme has been very positive.

“We had over 2,000 persons at Jamaica College and more than 500 schools represented. At Lynch Park, we had over 800 persons and 148 institutions represented, which was extremely good,” she adds.

Mrs. Degrasse-Deslandes notes that while the outturn for the inaugural fair was surprising, it was pleasing.

“We had persons from almost all parishes…some from as far as Westmoreland. I believe persons wanted to know what the certification exercise was about…and what they needed to do (regarding their schools’ compliance). It also gave the staff a chance to interact with representatives of a number of the schools at the outset,” she adds.

The Acting Executive Director also hails the support being provided by a number of stakeholder partner agencies and entities.

Mrs. Degrasse-Deslandes says efforts were made to have representatives from these entities on location to assist in explaining and administering activities and procedures supporting the performance criteria for each Standard.

“So we have had the police doing fingerprinting, public health officers doing food handlers clinics and the JFB explaining fire safety requirements and the importance of having a fire plan, and nutritionists from the Ministry of Health helping persons with their schools’ nutrition plans.

“These activities are designed to assist persons in attaining the Standards. So we brought these stakeholders together so that persons could access their services under one roof, (thereby enabling them to get) one step closer to certification,” she adds.

In acknowledging that the work to be undertaken with the remaining 73 schools “will be gradual”, Mrs. Degrasse-Deslandes says the ECC will do everything to ensure all 100 shortlisted schools are certified by August 2017, and is confident that the target can and will be met.

She emphasizes that the ECC Board’s focus on certifying the early childhood institutions over the next three years, “is ensuring that, over the long term, we have positive child outcomes.”

“We are speaking of a Jamaican child that can compete with any child anywhere in the world, at any time. So, we will tailor our interventions and our interactions, where necessary. Our children must be afforded the same start in order for them to get to where we need them to reach,” she adds.

“We are pretty confident because of the plans that have been put in place. Within the first six months of the Board’s tenure, we have identified the need for capacity building within the Early Childhood Commission. We have also looked at capacity building for the practitioners and deepening relationships with our partners,” she outlines.

Mrs. Williams-Singh says based on these and other key considerations, “I am confident that a minimum of 300 schools will be certified during the time of this Board.”