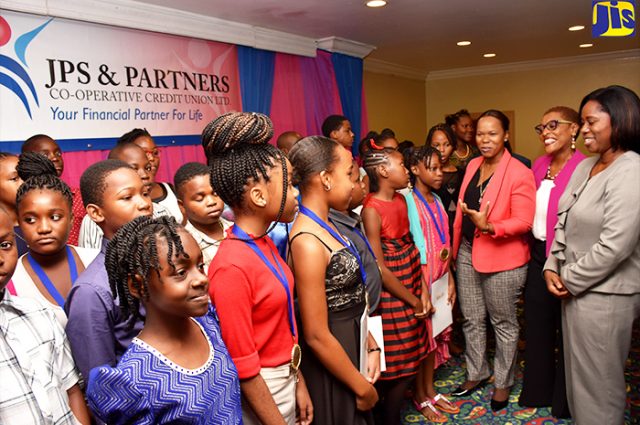 Among them are 55 top performers in the 2017 Grade Six Achievement Test (GSAT), who will receive $12,500 per annum over five years.

Under the Credit Union’s ‘Adopt a School’ programme, bursaries valued at $12,500 were presented to three students from Central Branch All-Age School, who will be making the transition to the secondary system.

The Albert ‘Bertie’ Morris Scholarship, named after one of the Credit Union’s founding fathers, was awarded to Jaidenn Williams, who will be entering the University of Technology’s architecture programme in September. He will receive $150,000 annually over three years.

Addressing the awards ceremony on August 10 at The Knutsford Court Hotel in New Kingston, Director of Regional Educational Services in the Ministry of Education, Youth and Information, Captain Kasan Troupe, congratulated the scholars on their academic achievements.

She encouraged them to continue to pursue excellence in their educational pursuits.

“You need to embrace lifelong learning. Embrace your education. Today, we are celebrating your success, but this is just the beginning. When you get to high school you will be exposed to more subjects… but learning does not stop at school. You are always learning and becoming better. You must remain motivated,” she said.

Students are selected based on academic merit, work ethic, discipline and financial need.

The Technical Services Unit has as its responsibility the architectural, engineering, quantity surveying, project management, site acquisition, contract management and supervision services of the public education system.  The unit is responsible for coordinating the development of the annual Schools Maintenance...
read more