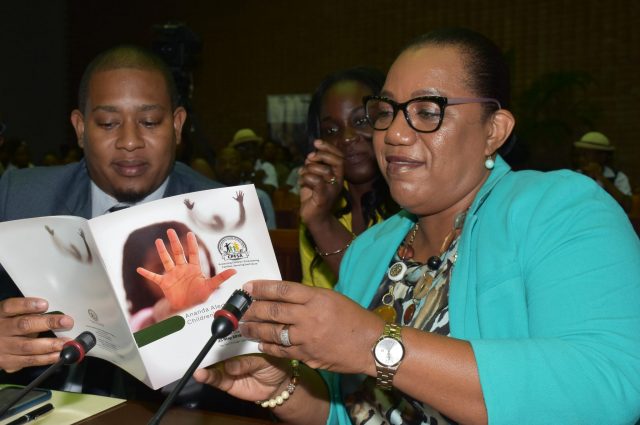 JIS: Children are being warned to desist from oversharing personal information on social media platforms, as a worrying trend has emerged of them going missing after making face-to-face contact with strangers they met online.

State Minister for Education, Youth and Information, Hon. Floyd Green, issued the caution to students at the National Missing Children’s Forum, held at the Jamaica Conference Centre in Kingston on May 25.

Mr. Green urged the children to be careful, “as social media profiles tell the world a lot about you”.

“Some of you are leaving profiles that you think will go away (but) they will follow you for your entire life. You have to take significant note of that,” he added.

The State Minister recalled an incident in which a child residing in Montego Bay, St. James, went missing and was found dead after leaving home to meet an individual she had met through social media.

Meanwhile, Director of Safety and Security in Schools, Assistant Superintendent of Police, Coleridge Minto, told JIS News that he continues to ramp up public education by speaking to students about the dangers of social media.

The Counter-Terrorism and Organised Crime Investigation Branch (C-TOC) of the Jamaica Constabulary Force (JCF) has also assisted children in understanding the dangers of posting locations and other identifying information online.

“C-TOC has been going into the schools to ensure we promote the message of responsible use of social media, and we find that it is working to an extent, but we still have more work to do in terms of making our parents empowered to understand social media in a responsible way,” Mr. Minto said.

Aimed at bringing together a wide cross section of individuals to discuss the ongoing issue of missing and exploited children, the forum was held under the theme ‘Be the Change! Help us bring our children home’.

Held against the observance of International Missing Children’s Day, the forum was intended to strengthen the local legislative policy framework that governs missing children and to educate them on how to better protect themselves.

In 2017, a total of 1,674 children were reported missing, which shows a three per cent decline when compared to the corresponding period in 2016.

Of those children, a total of 1,476 were returned home, maintaining a nine out of 10 return or rate of recovery.

For her part, Chief Executive Officer of the Child Protection and Family Services Agency (CPFSA), Rosalee Gage-Grey, said that “one child lost is a missed opportunity in the furtherance of a prosperous Jamaica”.

She emphasised that the agency remains committed to reuniting families with their loved ones and will be continuing to explore ways to tackle violence against children.

This is to be done through an improved National Plan of Action for Violence against Children, which includes the roll-out of a public education campaign in coming months.

“We firmly believe that the conversation about violence against children must be on the agenda of every household across the island,” she said.

During the forum, four schools selected in the Ananda Alert Safe Schools Competition presented on tangible projects within their schools aimed at fostering a safer school community and building awareness around the Ananda Alert System.

The schools are Frome Technical High in Westmoreland, Greater Portmore High in St. Catherine, Glenmuir High in Clarendon and Westwood High in Trelawny.

CAPTION: State Minister for Education, Youth and Information, Hon. Floyd Green (left), and Chief Executive Officer (CEO) of the Child Protection and Family Services Agency (CPFSA), Rosalee Gage-Grey (right), discussing the programme for the National Missing Children’s Forum with Public Relations Officer of the CPFSA, Jeneva Gordon, at the Jamaica Conference Centre in Kingston on May 25.