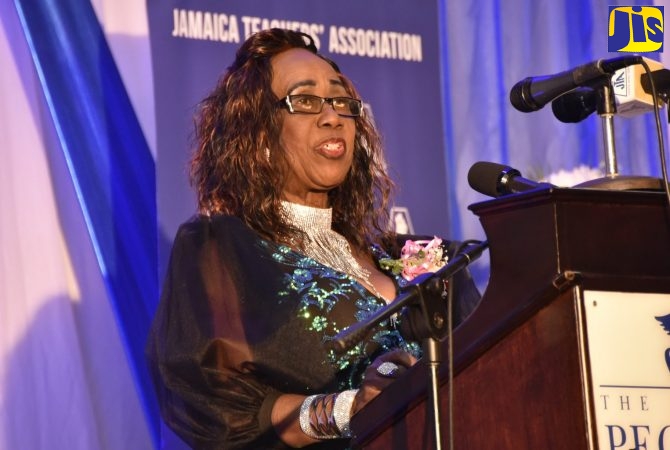 JIS: Minister of Education, Youth and Information, Senator the Hon. Ruel Reid, has hailed 2018 Jamaica Teachers’ Association (JTA) Roll of Honour Awardee, Sadie Comrie, for her exemplary leadership and service to the sector.

He noted that she has set an excellent example for others to follow, from New Works All-Age School in Westmoreland, where she established a Reading Club, to Lacovia High School in St. Elizabeth, where she served as a Teacher/Librarian for 13 years.

“Sadie became President of the JTA in 2002, and then serving the JTA and the Ministry of Education as a liaison officer [from] 2008 to 2010; and in all these capacities you have shown exemplary leadership within our schools and the wider Jamaican society,” Senator Reid said.

He was addressing the award presentation ceremony held on February 12 at The Jamaica Pegasus hotel in New Kingston.

The JTA Roll of Honour Award recognises outstanding contribution to education, consistent with the Association’s Code of Ethics.

The Honour Roll demands of the awardee the highest level of probity, integrity and professional conduct. It also seeks to emphasise excellence in performance.

Senator Reid noted that in honouring one of its long-serving members, the JTA is showing not just “an appreciation for the long and dedicated service of the awardee, but also of the values that that individual, Mrs. Comrie, embodies”.

A passion for excellence in education, an enduring commitment to the mission of the JTA, and selfless service to community and country are the hallmarks of the professional journey that took Mrs. Comrie from her initial teaching job at Belfont Basic School in St. James, more than 50 year ago, to the pinnacle of the education system in Jamaica.

‘Lady Sadie’, as she is fondly called by her colleagues because of her impeccable deportment and fashionable style of dressing, is widely respected throughout the profession.

She is the recipient of the JTA’s Golden Torch; and the R.C. Tavares, and W.B.C. Ben Hawthorne Awards; the Association’s 50th Anniversary Award; as well as the JTA Lasco Salute to Teachers’ Award for Excellence in Education.

For his part, JTA President, Dr. Garth Anderson congratulated Mrs. Comrie for her contribution to education in the classroom, as an administrator, and for her 50 years as a member of the profession.“Her impact and legacy as a stalwart to the sector will live on for generations to come,” he said.

CAPTION 2: Minister of Education, Youth and Information, Senator the Hon. Ruel Reid (right), shares a moment with (from left: President, Moravian Church in Jamaica and the Cayman Islands, Rev. Phyllis Smith-Seymour; Retired Teacher, Arthur Comrie; and the Jamaica Teachers’ Association 2018 Roll of Honour Awardee, Sadie Comrie. They were at the presentation ceremony held on February 12 at The Jamaica Pegasus hotel in New Kingston.