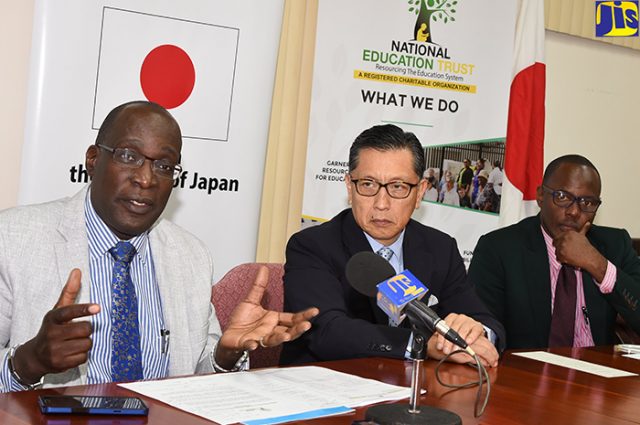 JIS: Minister of Education, Youth and Information, Senator the Hon. Ruel Reid, is on a mission to create a national school bus system, which will provide transportation for students in all parishes.

Speaking at the signing of an $8 million Japan Grassroots Human Security Grant agreement with the Ambassador of Japan, His Excellency Hiromasa Yamazaki, on January 10 at the Office of the Prime Minister, Senator Reid said one of his dreams is to have a society where schools have buses assigned to them.

“We’re looking at an overarching plan to provide transportation for all students. We need 1,000 buses to cover the need of the schools. I have that particular aspiration of a comprehensive national school bus system for a number of reasons, not only for safety, but to get our students to school on time and in a managed and regulated way,” the Minister said.

“While we have this vision for the rural transportation system, we didn’t just sit back. We have committed over $204 million at the start of this academic year towards this particular rural bus system,” he added.

He emphasised that there is a great need for the national school bus system in rural areas, adding that students would be transported more safely, parents would save from the high cost of transportation, and there would be less burden on the rural transport operators with privately owned vehicles.

“The cost for transportation is extremely high in rural areas. We’re talking about small farmers who are essentially just trying to survive. There is a significant number of students in the rural areas who are on the Programme of Advancement through Health and Education (PATH), and they will need the transportation system,” the Minister argued.

Senator Reid pointed out that, on average, about 20 per cent of students are absent from school each day.

“In the recent Survey on Living Conditions, it wasn’t strange to us that an overwhelming majority of those who were interviewed said money was the main fault why they couldn’t send their children to school regularly,” he noted.

“We’re doing a lot in trying to get the children to school [through PATH], trying to give them lunch for five days, trying to provide insurance, IDs and books. That’s wonderful, but if the children are not able to get to school, all of those efforts are for naught,” he said.

The grant will cover the cost to purchase a school bus for Oracabessa Primary School in St. Mary.

The Japan Grassroots Human Security Project was developed based on an alliance formed by the Embassy of Japan in Jamaica and the National Education Trust on April 20, 2015. This partnership is aimed at meeting education needs at the primary level in schools in need of assistance.

CAPTION: Minister of Education, Youth and Information, Senator the Hon. Ruel Reid (left), speaks at the signing of a grant agreement with the Japan Grassroots Human Security Project at the Office of the Prime Minister on January 10. Listening (from second left) are: Ambassador of Japan to Jamaica, His Excellency Hiromasa Yamazaki, and Principal, Oracabessa Primary School, Gregory Davis.