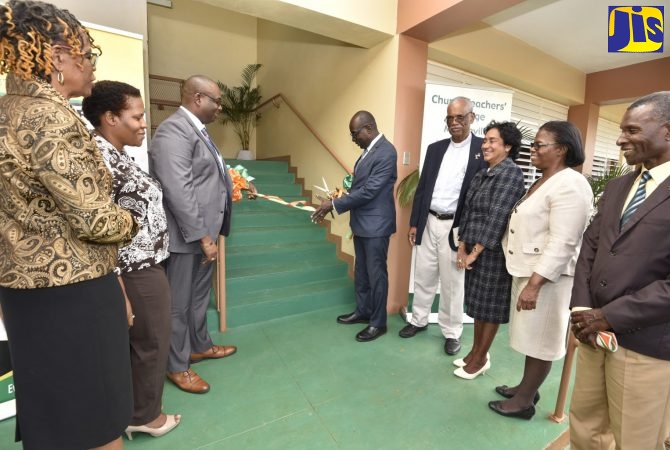 JIS: The parish of Manchester now has a diagnostic and care centre, which will cater to the special learning needs of children with autism and cognitive challenges.

The Educational Assessment and Resource Centre, located on the grounds of Church Teachers’ College in Mandeville, was built by the Government at a cost of $35 million.

It boosts two play and learning rooms, observation room, a nurses’ station, an administrative section, as well as lunchroom, bathrooms, offices and laboratories.

Minister of Education, Youth and Information, Senator the Hon Ruel Reid, said that the establishment of the centre is in keeping with Government’s focus on ensuring that the education system is inclusive and enables students to maximise their full potential.

“We are going to use the diagnostic centre to make sure that no child is left behind in the region,” he said, noting that it will customise learning through the use of technology.

He was delivering the keynote address at the official opening of the centre on February 19.

Senator Reid said that global figures indicate that one in every 10 students is likely to have severe special needs.

He noted further there are persons with mild autism, who go undetected. “Indeed, one in every 42 boys is autistic and one in every 167 girls is autistic. Autism is on a spectrum of mild to severe. Some of the challenges faced in the classroom are because this goes undetected,” he said.

The Education Minister said that in addition to establishing assessment and diagnostic centres, increased focus will be placed on an early stimulation/intervention strategy that addresses needs during the first 1,000 days of the child’s life.

The United Nations Children’s Fund (UNICEF) has said that the period spanning between conception and one’s second birthday is when the foundations of optimum health, growth and neurodevelopment across the lifespan are established.

“Learning begins from conception because the first 1,000 days from conception to age two is a key age; two is the highest point of their cognitive neurological development (brain capacity)” Minister Reid added.

In his remarks, Jamaica Teachers’ Association (JTA) President, Dr. Garth Anderson, said the body has been advocating for the early assessment of students entering the education system at the early-childhood level for the purpose of developing a learning profile and targeted intervention.

Dr. Anderson, who is also Principal of Church Teachers’ College, urged that the diagnostic centre be fully utilised to “fulfil its mission of not only assessing students but to also be effective in changing the way in which we do teaching and learning”.

CAPTION ONE: Education, Youth and Information Minister, Senator the Hon. Ruel Reid (fifth right), cuts the ribbon to officially open the Educational Assessment and Resource Centre at the Church Teachers’ College in Mandeville, Manchester, on February 19. Assisting the Minister is Jamaica Teachers’ Association (JTA) President and Principal of the college, Dr. Garth Anderson (third left), while officials from the Ministry and the college look on

CAPTION TWO: Minister of Education, Youth and Information, Senator the Hon. Ruel Reid, delivers the keynote address at the opening of the Educational Assessment and Resource Centre at the Church Teachers’ College in Mandeville, Manchester, on February 19.