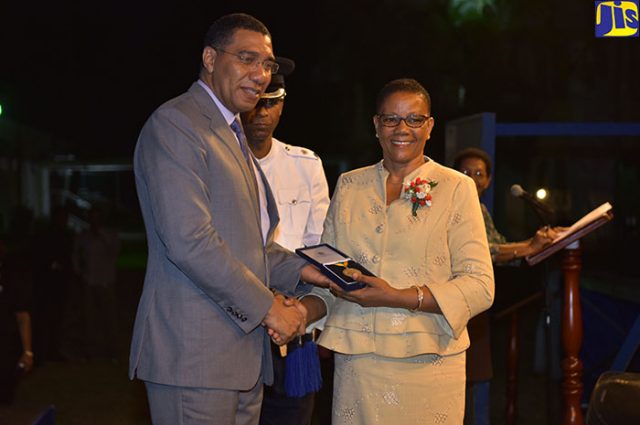 JIS: After almost four decades in the teaching profession, Vice-Principal of Calabar Infant, Primary and Junior High School, Claudine Evette Bowen, has been awarded the Prime Minister’s Medal of Appreciation for Service to Education (PMMA).

“I had no idea that I would have been given this prestigious honour. However, on May 28 when someone at the school told me that a lady from the OPM (Office of the Prime Minister) had called asking where I first taught, I started to wonder,” Mrs. Bowen tells JIS News.

“When I finally received the confirmation, I screamed,” she recalls with a broad smile.

“My visit to Jamaica House for the rehearsal was my first. I have seen the Prime Minister, but we have never interacted,” she says, noting that she was pleased to receive the Medal from him.

Mrs. Bowen began her career on April 1, 1979 at Grateful Hill Primary in Glengoffe, St. Catherine, as a pretrained teacher and steadily worked her way up the ranks of pedagogy from senior teacher to grade coordinator to her current position.

“I don’t see the work as difficult. For me, it’s more like a marriage. At times, teeth and tongue will meet, but that’s a part of the package,” says Mrs. Bowen to JIS News. “Moreover, I believe I was called to the vocation,” she asserts.

Taking care of the whole child is key, hence Mrs. Bowen finds ways to assist students with their various needs and inspire them to do well in school.

A ‘high performance’ cabinet, built by a parent, is used in motivating students to excel. The cabinet showcases the names of students averaging over 80 per cent in their subjects.

“Concomitantly, it motivates those who have achieved cabinet status to strive even more to retain their position,” she underscores.

Another source of pride for students is the Vice-Principal Award for the Top Grade Six Achievement Test (GSAT) Boy and Girl. “The award is given to these two pupils at the end of the academic year,” shares the PMMA recipient.

The multifaceted educator is not just concerned with her students but also about the facility.

With a love for construction, which she developed from remodelling her own house, she spearheaded the refurbishing of the office that serves her and a senior Vice-Principal, and the Bursar’s office, with help from donors such as Wisynco Trading and Mother’s.

The PMMA award recipient prefers to stay away from the limelight, but this has proven to be a difficult task.

She notes that a justice of the peace (JP) recently visited her with the newspaper listing of the honourees.

“He said to me: ‘A just come fi see if a really your name inna di paper,’. He hugged and congratulated me and left the newspaper at the house,” recounts Mrs. Bowen.

“As for my husband, he says I am a pusher, so he is not surprised,” she adds.

The distinguished teacher will be going off on retirement in a year. However, she has no plans to stop serving her country.

“I will still be around. I will now have more time to devote to being a JP and Lay Magistrate, board and committee member and deaconess. Moreover, I will be launching my own company,” the Vice-Principal says.

CAPTION: Prime Minister, the Most Hon. Andrew Holness (left) presents Vice-Principal of Calabar Infant, Primary and Junior High School, Claudine Evette Bowen (right), with the Prime Minister’s Medal of Appreciation for Service to Education at the awards ceremony on the lawns of Jamaica House on June 27. Assisting the Prime Minister is Superintendent Michael Morrison.

The Ministry of Education and Youth is pleased to share with our stakeholders the Caribbean Vocational Qualification Handbook which will outline the requirements and guidelines for secondary schools administering the programme. We hope that this step-by-step approach on the implementation...
read more