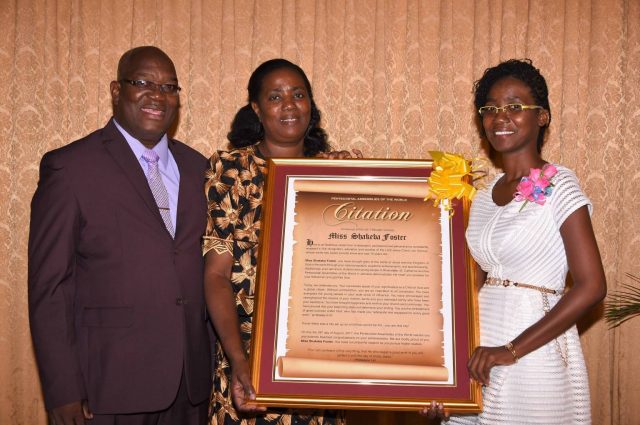 Mr. Bernard said the level of education a child receives during the first three years of his/her life is pivotal in setting a solid foundation for future academic excellence.

This, he said, is evidenced by the accomplishments of outstanding individuals such as 2017 Rhodes Scholar, Shakeba Foster, who, he notes, has been excelling from her early years.

Ms. Foster, who is 23 years old, holds a Master of Science (MSc) degree in Economics with distinction; and a first-class honours Bachelor of Science (BSc) degree in Banking and Finance from the University of the West Indies (UWI). She edged out 10 other candidates to emerge the winner of the prestigious scholarship.

Mr. Bernard said it is this calibre of student that the Ministry of Education aspires to continue producing.

The Permanent Secretary was speaking at a function held in honour of Ms. Foster at the UWI Mona Visitors’ Lodge in St. Andrew on Saturday, August 26.

Mr. Bernard said one such intervention is streamlining early childhood education, “so that our children are assessed very early and we can design the educational pathway in partnership with parents.”

The Permanent Secretary also mentioned a raft of other strategies being undertaken by the Ministry to improve students’ educational outcomes.

These include: special intervention activities for maladjusted and slow learners; building out diagnostics centres in every county for students with learning challenges; and changing how students are assessed academically from grade two onwards.

The Permanent Secretary said through these and other initiatives, the aim is not only to produce students of high academic excellence, but individuals who are critical thinkers, emotionally intelligent, problem solvers and experts at conflict resolution.

In the meantime, Mr. Bernard described Ms. Foster as a brilliant, resilient, hardworking Jamaican who is “poised for greatness, poised to lift the (Jamaican) flag high (and) poised to cause our national anthem to be heard (internationally).”

He expressed confidence that the Rhodes Scholar will continue her track record of excellence as she pursues a Master of Philosophy (MPhil) at the illustrious Oxford University in the United Kingdom.

During the event, which was staged by the Pentecostal Assemblies of the World of Jamaica, Inc. (PAWJa), Ms. Foster was presented with various gifts including a framed photograph capturing the occasion of her scholarship presentation by Governor-General, His Excellency the Most Hon. Sir Patrick Allen, during a ceremony last year.

The presentation was made by Chief Executive Officer of the Jamaica Information Service, Donna-Marie Rowe. The photograph was produced by the agency, which was also a sponsor of Saturday’s function.

Ms. Foster also received gifts from several other sponsors. They included: a cellular phone from telecommunications firm, FLOW; and a day pass for three at Moon Palace, Jamaica Grande.

She was also presented with cash, a plaque and a framed copy of a citation among other tokens.

In response, Ms. Foster pledged that she would continue to work hard and expressed gratitude to her family, close friends, colleagues and the church for their support and encouragement in her various endeavours.

The Rhodes Scholarship is presented by the Rhodes Trust, which was established by British diamond magnate and imperial statesman, Cecil John Rhodes.

CAPTION: 2017 Rhodes Scholar, Shakeba Foster (right), is presented with a citation by General Secretary, Pentecostal Assemblies of the World of Jamaica, Inc. (PAWJa), Maureen Marshall (centre), while PAWJa Diocesan Bishop, John Thorpe, looks on. The occasion was an event hosted by the PAWJa in honour of Ms. Foster at the University of the West Indies Mona Visitors’ Lodge in St. Andrew on Saturday, August 26.The citation was a congratulatory statement written by the PAWJa, which praised Ms. Foster for her academic achievements as well as her service to young people in the community. The event was sponsored by the Jamaica Information Service; Telecommunications firm, FLOW; and Moon Palace, Jamaica Grande resort.