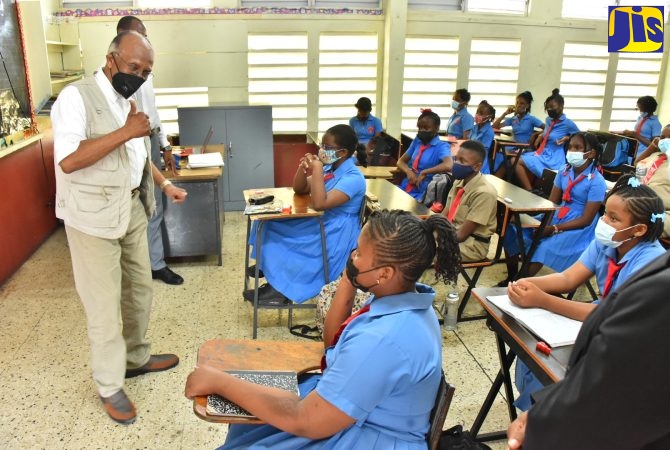 As the Government seeks to transform the education sector, the Jamaica Education Transformation Commission (JETC) is engaging with academic institutions islandwide for feedback on current policies and recommendations.

This follows the release of the JETC report on January 13, 2022, which outlined recommendations to the Government for the advancement of the sector.

Leading the discussions is Chairman of the Commission, Professor Orlando Patterson, who is on a two-week working visit to the island. He is expected to leave on Wednesday, June 8.

Professor Patterson started his school visits with May Pen Primary and Glenmuir High Schools in Clarendon, as well as Church Teachers’ College in Manchester on May 30.

He pointed out that he would visit schools he considered to be either “good, bad or average”.

“I wanted to meet with the teachers. I wanted to talk to them about what they thought of the report, and I was happy to see that they seem to have read it and agreed with some of the fundamentals, like the importance of early-childhood training,” the Professor said.

He noted that while he thinks the Government to be in strong support of the report’s recommendations, he will continue to encourage more resources to be allocated to the pre-primary and primary academic levels.

“Get the foundation right. The early-childhood sector is what we need to emphasise,” he said.

On that note, Professor Patterson reiterated from the report that the implementation of initiatives such as the Primary Exit Profile (PEP) is a step in the right direction.

“That was a good move because it shifted the focus from memory learning to one that emphasises the extent to which students’ critical faculties are being exercised, and students learn to think rather than just to regurgitate [from memory],” he pointed out.

Meanwhile, Principal of Glenmuir High, Marsha Smalling, while speaking with the Professor, recommended that “more time” be given for the implementation of creative initiatives and programmes attributed to the sector.

“They’re brilliant ideas, but we’re not giving them time to work, and it is not easy to always be readjusting [your] mindset to facilitate new initiatives,” she said.

In order to support the report’s recommendations, Prime Minister, the Most Hon. Andrew Holness, during his 2022/23 Budget Debate presentation on March 17, 2022, announced that he would appoint an Education Transformation Oversight Committee (ETOC) for the implementation of the report.

It will be responsible for monitoring and publicly reporting on the progress of implementation, while being chaired by Financial Economist and a Director of the Development Bank of Jamaica (DBJ), Dr. Adrian Stokes.

Professor Orlando Patterson is the John Cowles Professor of Sociology at Harvard University in the United States.

As a historical and cultural sociologist, he previously held faculty appointments at the University of the West Indies, his alma mater, and the London School of Economics and Political Science in England.

The Facilities Management Unit has as its responsibility the administration of the physical appearance of the Ministry buildings, the management of the Ministry’s vehicles for transportation island-wide and the processing of documents for the payment of bills.   For more...
read more