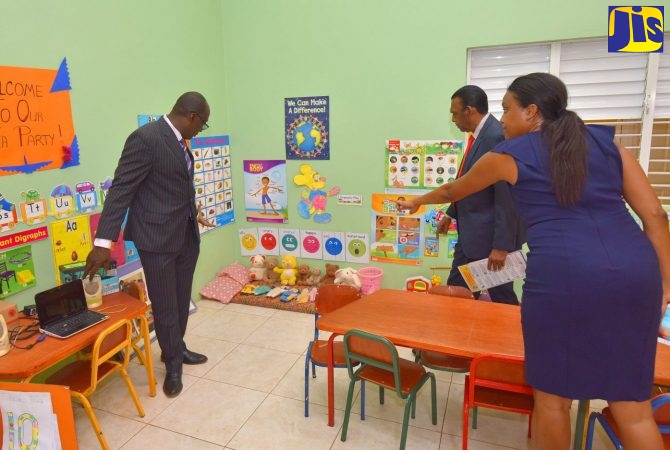 JIS: The first cohort of 109 specialist mathematics teachers is now in training and will be deployed to the education system, upon graduating next year.

This was disclosed by Minister of Education Youth and Information, Senator the Hon. Ruel Reid, who noted that the teachers will be bonded for a five-year period.

He informed that the five-year bond would ensure that the Government gets a return on its investment.

The Education Minister was speaking at the official opening ceremony for the newly constructed building at the New Forest High, Primary and Infant School in Manchester on November 29.

“The children who are here today are at a crucial stage of their physical, intellectual, emotional, social and creative development. At this stage, the growth of their mental and physical abilities progresses at an astounding rate. That is why we need to provide them with a positive learning experience,” Mr. Heaven said.

Meanwhile, Chairperson of the Early Childhood Commission, Trisha Williams-Singh expressed appreciation to the CHASE Fund for the building and furniture, which she said would help the school to achieve the 12 Operating Standards for Early Childhood Institutions.

“The first two and a half to three years of a child’s life are critical for cognitive, social and emotional development. This time span is the period where a solid foundation for health and well-being can be created for children in their childhood and beyond. Good-quality resources and environment help to secure optimal development of our children,” Mrs. Williams-Singh said.

She noted that for children, the resources would play a crucial role in their health, behaviour, engagement, learning and growth, noting that research has shown that without adequate facilities and resources, it is difficult to serve large numbers of children with complex needs.