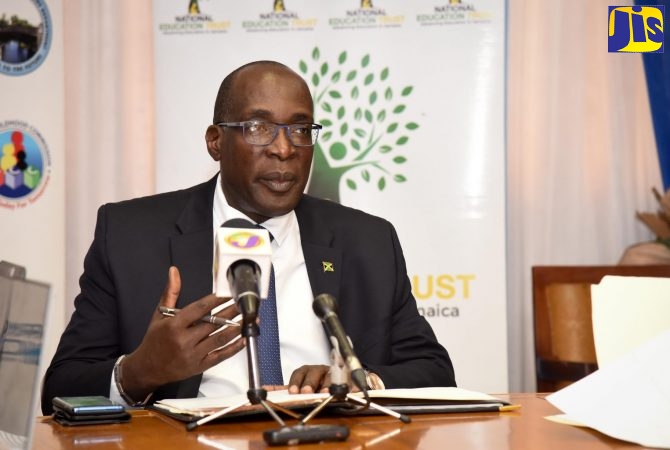 JIS: The Government has spent approximately $533 million to build 69 classrooms and accompanying amenities in primary and secondary schools since 2016, to take students off the double shift system and ease overcrowding.

Minister of Education, Youth and Information, Senator the Hon. Ruel Reid, made the disclosure during a press conference at the Ministry in Kingston on February 5.

Additionally, he said Mineral Heights Primary and Port Henderson Primary Schools came off the system in 2018, while Exchange All-Age, Cedric Titus High, Papine High and Muschette High are slated to do so soon. Only 38 institutions remain on the system.

Meanwhile, Senator Reid said the Ministry has embarked on expansion and upgrading projects to convert some institutions to full high schools.

“Within that list, works have commenced at Nain, New Forest and Aberdeen, and funds have been mobilised for completion,” he disclosed.

The Minister also advised that similar work has been concluded at Stony Hill High School.

Meanwhile, Senator Reid said a technical planning team has completed preliminary activities at Discovery Bay All-Age, which is also being converted to a high school.

“Once finalised, a design will be completed and contracting will be done thereafter. The desired timeline for this upgrade is to have the first phase completed for the start of the new [2019/20] school year,” he said.

He also disclosed that 33 ramps have been built in schools to improve access for physically challenged students.