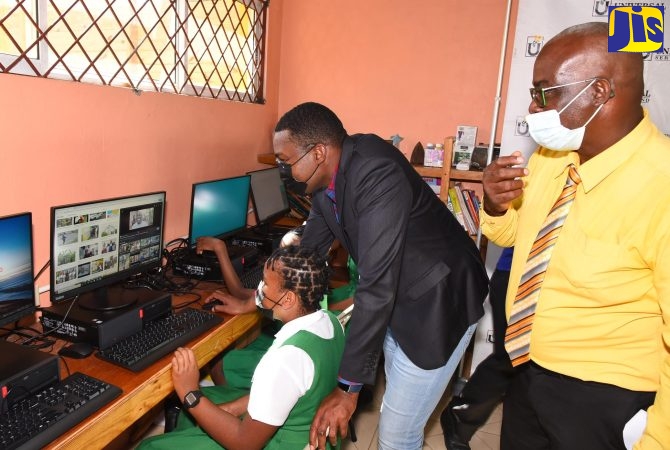 A Community Access Point (CAP) was officially opened at the Brixton Hill Primary and Infant School in Clarendon on Wednesday (January 19), which will benefit students at the institution and the wider community.

The CAP site, established by the Universal Service Fund (USF), is equipped with 20 computers, a projector with accompanying screen and mount, and desks and chairs.

Residents will be able to access internet service from their mobile phones or tablets.

Minister of Information and Member of Parliament for Clarendon North Central, the Hon. Robert Morgan, who addressed the official opening ceremony, hailed the establishment of the site as a major achievement for the school, the students, teachers, and the wider Brixton community.

He said that residents of the neighbouring area of Mocho will also benefit from the use of the facility.

Minister Morgan urged the students to make the most of their education.

“I recognise that the only reason I became the Minister of Information in the Office of the Prime Minister is because of my education. It was because I got an opportunity to go to school and I want that opportunity for every single child in this room, because the only way you are going to rise in the modern world is through education,” he said.

Chief Executive Officer of the USF, Daniel Dawes, in his remarks, said that the entity is on a mission to connect Jamaicans through the setting up of CAP sites and Wi-Fi hotspots.

He noted that more than 350 CAP sites have opened to date at schools, churches, and community centres across the island.

As it relates to the public Wi-Fi hotspots, Mr. Dawes noted that three such sites are being established per constituency.

For Clarendon, the hotspot locations are Stewarton District, Rock River and Mocho.

“As we move from east to west, we have outfitted more than 40 [communities] and I guarantee to you that before the end of this month, we will be [about] 100 and plus. We have committed to the Minister [Morgan] and to the Government and people of Jamaica, that by the end of this financial year, we would have outfitted 189 communities with free Wi-Fi,” he said.