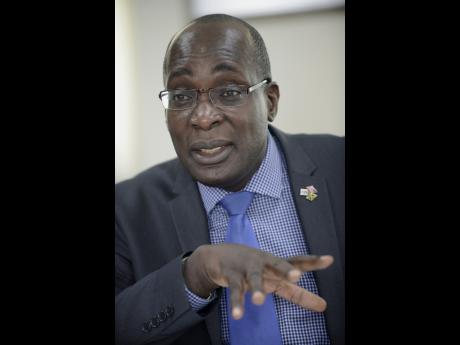 JIS: Minister of Education, Youth and Information, Senator the Hon. Ruel Reid, says that all of the island’s 171 high schools now have metal detectors.

Most institutions are equipped with handheld scanners.

“We have some walk-through detectors now being installed in selected schools and another 200 (handheld) devices are being procured to ensure that defective ones are readily replaced,” Senator Reid said.

He was speaking at the back-to-school conference for regions one, two and six held at the Jamaica Conference Centre, downtown Kingston, on June 14.

The equipping of schools with metal detectors is part of measures to improve safety and security for staff and students.

Senator Reid informed that all institutions are required to have an active safety and security committee, which is audited on a regular basis, along with the entire school, to ensure that the safety policies are being implemented.

He said that the Ministry works closely with the police, and there are over 200 school resource officers assigned to schools, who provide support as necessary.

In addition, the Education Ministry has started the roll-out of closed-circuit television (CCTV) systems in schools.

Senator Reid said this is to ensure that institutions are able to review incidents and take corrective action where necessary.

“We would like to put CCTV in every school… that helps you to better survey your compound, better give you information on students who are regularly conjugating at a particular location and displaying certain antisocial behaviour,” he noted.

He said it is expected that by the year 2020 at least 80 per cent of schools will have this technology.

Meanwhile, Senator Reid noted that the Ministry understands the importance of having uniformed groups in schools and is working towards increasing such groups across the system.

Uniformed groups help to enhance discipline and socially acceptable behaviours among students. To date, over 600 schools have some form of uniformed group.

CAPTION: Minister of Education, Youth and Information, Senator the Hon. Ruel Reid addresses the back-to-school conference for regions one, two and six held at the Jamaica Conference Centre