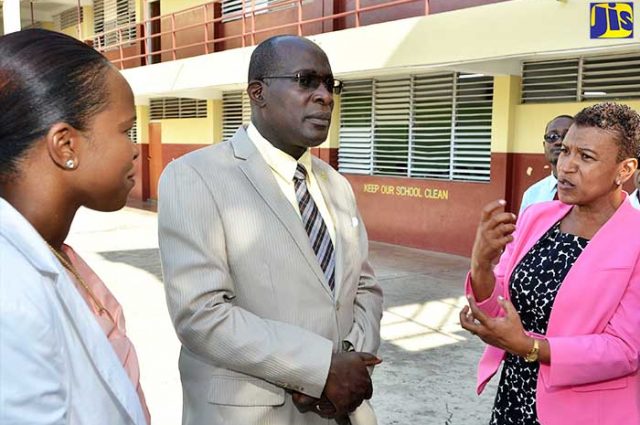 JIS: Minister of Education, Youth and Information, Senator the Hon. Ruel Reid, says he is determined to have 100 per cent of primary-level students matriculating into secondary schools for a full five-year course of study.

Speaking to students from Wolmer’s Boys’ and Girls’ schools in Kingston during their devotion on September 25, the Minister said Jamaica is only one per cent away from achieving this target.

“For many years, over 70 per cent of students in Jamaica did not have access to education beyond grade nine. This year marks the first time in our history that we were able to place 99 per cent of our cohort into a full five-year high-school programme. Next year, hopefully, we’ll be able to place the full 100,” Senator Reid said.

“The message I share is about opportunity for all. There was a view that education was elitist. Today, the society is not going to be productive if only some have and the majority don’t have. We want a society where everyone gets equal opportunity for self-development and self-determination, aspiration for goodness and their own sense of self-worth and achievement,” the Minister added.

Senator Reid said he believes achieving the goal of getting 100 per cent of students enrolled at the secondary level up to fifth form and placed in a full five-year course of study will benefit the society in a major way in the long run.

“Currently, when you look on our workforce of 1.3 million persons, 15 per cent have tertiary education and training, 18 per cent have what we call technical certification from HEART Trust/National Training Agency (HEART/NTA) and City and Guilds, and then 67 per cent did not complete secondary education or any training – almost 800,000 Jamaicans,” he said.

The Minister said that through programmes being offered by the Government, such as Science, Technology, Engineering and Mathematics (STEM) and the Programme of Advancement Through Health and Education (PATH), along with programmes from other organisations, the one per cent of students who were not placed in a full five-year course of study at the secondary level, can be reached.

“We have been pushing science, technology, engineering [and] mathematics largely because the world economy has changed rapidly. We’re now in the fourth industrial revolution where technology is taking over, and a lot of what we will do, how we’ll conduct business, produce goods and services, will be heavily impacted by technology,” he argued.

“When we talk about STEM, it is because this is the new economy, and so your education, your training have to be aligned to what is happening in the new economy and for the future. We can’t turn it back. We have to embrace it, prepare for it [and] equip ourselves,” the Minister emphasised.

CAPTION: Minister of Education, Youth & Information, Senator the Hon. Ruel Reid (centre), listens to Principal, Wolmer’s Girls’ School, Colleen Montague, while on his visit to the school on September 25. At left is Region One Director, Ministry of Education, Capt. Kasan Troupe.