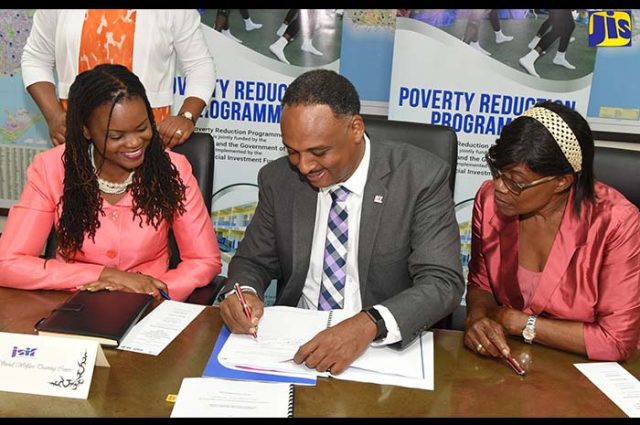 JIS: At-risk youth between eight and 25 years of age who reside in volatile and vulnerable communities in five parishes are to benefit from the Jamaica Social Investment Fund’s (JSIF) implementation of an $18-million behaviour change programme over the next eight months.

Contracts for the programme’s implementation were signed by JSIF Managing Director, Omar Sweeney, and representatives of partner non-governmental organisations (NGOs) that will work with community stakeholders, during a ceremony at the agency’s head office in New Kingston on Tuesday (September 18).

The Behaviour Modification Initiative/Community-based Behaviour Change Programme, which forms part of phase four of the European Union (EU)-funded Poverty Reduction Programme (PRP IV), aims to reduce deviant behaviour among the target beneficiaries through a range of social services and interventions.

These include conflict resolution, mentorship, the performing arts, sports, and training and soft skills development for employment.

Each parish will be allocated $3.6 million of the earmarked $18 million, to undertake activities.

This will be supplemented by communities’ contributions, facilitated by NGOs through various inputs, totalling $1.8 million.

In his address, Mr. Sweeney said that the behaviour-modification project is consistent with the country’s long-term National Development Plan – Vision 2030 Jamaica, specifically Goal #1, of ensuring that “Jamaicans are Empowered to Achieve their Fullest Potential”.

“I’m happy that [the] focus will be on behaviour modification and that this funding will support the work you, the NGOs, do every day,” he added.

Social Officer at JSIF, Taneisha Stoney, said the NGOs will partner with grassroots entities, such as community development councils, community-based organisations and youth clubs, to implement various programmes, which are expected to get under way on Wednesday (September 19).

She said it is anticipated that these interventions will yield that 15 per cent reduction deviant behaviour target under goal four of the PRP.

Meanwhile, JSIF Project Manager, Celia Dillon, said the agency welcomed the EU’s ongoing grant support, through which “we are able to help you fund another cycle of your programmes… because they are extremely important in our… fight [to reduce] poverty”.

The Human Resource Management and Administration Division has as its responsibility the systematic and coherent management and administration of the Ministry of Education’s personnel. This is necessary as a valuable asset in any organization is its employees. The Division helps...
read more