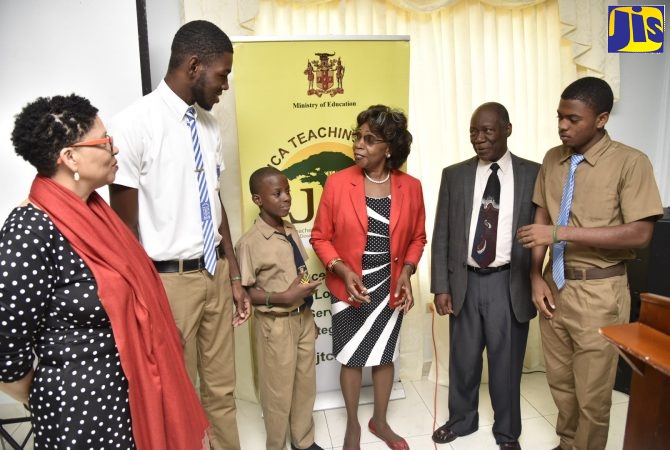 JIS: The Jamaica Teaching Council (JTC) and Collaborate to Educate our Sons recently pulled around 100 vulnerable boys from high schools across the island and boarded them at the Medallion Hall Hotel in St. Andrew for three days of mentoring under the Boys Education Empowerment Programme.

The mentorship sessions took place between September 18 and 20. It was endorsed by the Ministry of Education, Youth and Information.

At the mentoring sessions there were different speakers, which included representatives from the JTC and Collaborate to Educate our Sons.

Chief Executive Officer (CEO), JTC, Dr. Winsome Gordon, said although the organisation is responsible for serving the nation’s teachers, they chose to help with pulling the boys out of school for three days and spent time mentoring them, because there is a major need for it.

“Our teachers have complained about the engagement of boys in their classrooms, and when we look at the examination results, our boys are not doing nearly as well as our girls, so we decided to help our teachers to be able to teach our boys,” Dr. Gordon told JIS News.

She noted that this is the second phase of mentorship for the JTA, as they had a previous mentorship programme that lasted for five years.

Dr. Gordon also said her organisation chose to partner with Collaborate to Educate our Sons because this group, which is based in Washington DC, continuously works with black boys in the United States who are vulnerable and helps to guide them up to the tertiary level.

She believes the group can assist Jamaican young men and boys in the same way.

“They encourage boys to go to college, and when they came to us, we thought this was a brilliant idea because they have a lot of experience on mentoring boys,” she said.

Founder, Collaborate to Educate our Sons, Dr. Bertram Melbourne, who is Jamaican, said he chose to return to Jamaica and offer mentorship through his organisation, because that is one way he wants to give back to the society.

“I want to help to give a better future to boys and young men. We want to do something that will increase the enrolment of young men and boys in college, so as to guarantee their future. We want to do something that will raise the self-image of young men; help them to look forward to a better kind of future and be in a better position to make a contribution to society,” he told JIS News.

Dr. Melbourne said the mentorship sessions focused on different caring relationship strategies, which the presenters hope will inspire the boys.

Participant, Antione Foster, who is a student from Greater Portmore High School, said he was inspired by the presenters and the mentors during the three days.

“It has been enlightening, so far, and by coming here and listening to other persons’ points of view, I’ve noticed how much time I have wasted in school when there are other alternatives to do in my spare time,” he said.

He added that the three-day mentorship initiative has encouraged him to start thinking about a possible career path.

“It was an interesting programme that dealt with issues affecting men, as to the simple things that men overlook, which cause us sometimes to react in a certain way, for example, the difference between listening and hearing.

These are some of the issues we have in our schools [with boys],” he said.