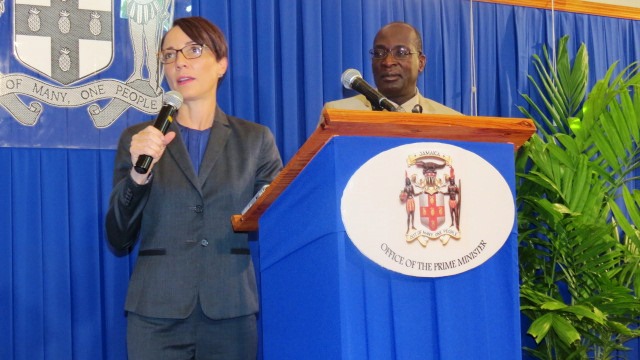 Senator Ruel Reid, Minister of Education, Youth and Environment disclosed on Wednesday (April 13) that Cabinet approved the award of a contract to Carlong Publishers (Caribbean) Limited to procure and distribute textbooks under the Primary Textbook Programme for 2016/2017 for the sum of US $ 1,462,360.52.

Speaking at the weekly post-Cabinet Press Briefing, Minister Reid also announced the upcoming regional launch in Jamaica of the 14th Anniversary of Vaccination Week in the Americas (VWA) under the slogan “Go for the gold! Get vaccinated”, April 24-30, 2016.  The total cost of staging the event is $ 6, 811, 827.40 of which PAHO will contribute US$ 12, 000.00. Cabinet took note that the initiative’s overarching objective is to target populations with limited access to regular health services, thereby working to close the gaps in immunization and strengthen the Expanded Program on Immunization (EPI) in the Americas.

Senator Kamina Johnson-Smith, Minister of Foreign Affairs and Foreign Trade also attended the briefing and updated the media on communication with her counterpart in Trinidad and Tobago to address the reported harassment by immigration authorities in that country of several Jamaican nationals recently.