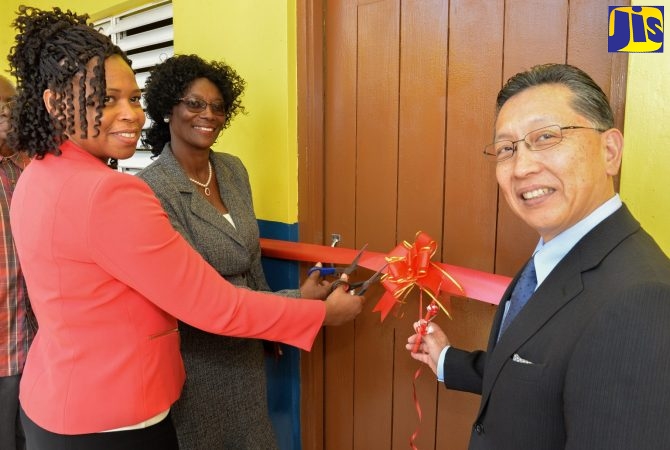 JIS: The Care Bear Early Childhood Development Centre on Waltham Park Road, St. Andrew, has been expanded to better serve the developmental needs of students in the community and surrounding areas.

Through $12 million in funding from the Government of Japan, under the Grant Assistance for Grassroots Human Security Project, an additional building was constructed on the school grounds to house three classrooms, a nursery, a storeroom, kitchen and two bathrooms.

At the official handover ceremony on Tuesday (February 26), Ambassador of Japan to Jamaica, His Excellency Hiromasa Yamazaki, gave his Government’s continued commitment to providing support to Jamaica in the area of education.

“Investing in education at the infant, primary, secondary or tertiary level is critical for the overall development of a country and its people. Therefore, Japan’s cooperation towards grassroots interventions, I believe, has a critical role in laying the foundation for long-term sustainable development and growth within the field of education and other productive sectors of Jamaica,” he said.

The Ambassador said the objective is to enable the Jamaican people to enjoy greater opportunities through good quality education.

“There can be no development without education… . I thank the Japanese government for partnering with us to build our people and develop our country,” she said.

Principal of the institution, Cynthia Roach-Porter, in expressing gratitude to the Japanese Government, noted that the expansion project has assisted in alleviating overcrowding at the school.

She noted that it will also enable the institution to become certified by the Early Childhood Commission (ECC).

CAPTION: Ambassador of Japan to Jamaica, His Excellency Hiromasa Yamazaki (right); Principal of Care Bear Early Childhood Development Centre, Cynthia Roach-Porter (left); and Deputy Chief Education Officer, Dasmine Kennedy, cut the ribbon to officially open a new building at the institution located on Waltham Road in St. Andrew on Tuesday (February 26). The project was undertaken through $12 million in funding from the Government of Japan.