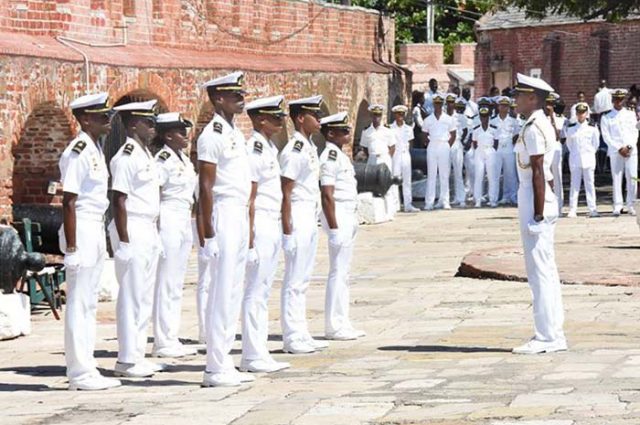 JIS: Executive Director of the Caribbean Maritime Institute (CMI), Dr. Fritz Pinnock, cannot disguise his immense joy as he speaks of the institution being granted university status, following the passage of legislation in both Houses of Parliament.

The Caribbean Maritime University (CMU) Bill 2017 was approved in the Senate on February 24, following approval in the House of Representatives on January 25.

According to Dr. Pinnock, it was a very emotional moment, as it was the realisation of a dream for the entire CMI community.

He expressed appreciation to the staff and students of the school, pointing out that they are the ones who have brought the institution to this point.

“Many of the people who make a difference on a daily basis are often overlooked, but play a key role in this operation,” he says.

He paid homage to one ancillary worker, whom he describes as having an indomitable spirit, is professional at all times and is committed to what he does, regardless of the task.

“Francisco will be a part of the construction team and work on the building in the morning, offer white-glove service at the Board meeting luncheon at midday and plant grass in the quadrangle in the evening. That is just one example of the commitment of my team, and I am only the cheerleader,” he beams.

According to Dr. Pinnock, CMI is teeming with students who are budding with potential.

“They only need to be guided, and this is our role. I sense the responsibility of the country upon the shoulders of this institution as we seek to guide the students to the next level,” he adds.

The Executive Director says gaining university status is a transformational move and that Jamaica will see a new approach to education and training, because they have been treated as separate in the past.

“Training is an integral part of education. It is about the total person. It is not just about giving persons a certificate at the end of a period of study, but how you make them better human beings, how you can teach them the value of volunteerism or the value of a good attitude while you are certifying them and giving them a professional recognition. That is what CMU of the future wishes to do,” he says.

Dr. Pinnock points out that it is with the granting of university status that the real work begins.

“The transition to a university is an expansion and improvement of the brand. We see ourselves as part of the economic-growth agenda by virtue of the relevant programmes that we are doing. We’ll be expanding the programmes, but not just in name. We are expanding them in line with the global market demands,” he explains.

The Executive Director says the institution will be expanding in the area of security, especially within the context of the global supply chain.

The institution currently offers bachelor’s and master’s degrees in security administration and management, (the first degree programme that integrates air, land and sea).

A new bachelor’s degree in cybersecurity will also begin in September.

“There are several programmes in the engineering field to begin this academic year, such as a Master in Systems Engineering, and a Bachelor of Engineering in Mechatronics, which is an integrated degree that merges mechanical and electronics engineering into one,” he says.

In the field of environmental engineering, the institution will be looking at offering new bachelor’s and master’s degree programmes in about 10 years, all relevant and backed by professional industry certification.

“We must be smart. We have a great product in Jamaica. It should not be devalued. Let us use it as an export possibility; rather than sending out millions of US dollars every year paying for persons to study overseas, why not have people from overseas coming to access our programmes?” he asks.

Dr. Pinnock says that CMI relies heavily on the power of partnerships and points out how a public-private partnership helped to make the specialised campus for the Customs Processing and Freight Forwarding students a reality.

“When we signed a Memorandum of Understanding (MOU) with Customs and Immigration, and the Customs Brokers and Freight Forwarders Association to facilitate training for their new system (ASYCUDA World), we went for the old police training school in Port Royal, which had been abandoned, and through a public-private partnership we were able to acquire it,” the Executive Director informs.

An aerial view of Caribbean Maritime Institute (CMI). The CMI will now gain university status, following the passage of legislation in both Houses of Parliament. (Contributed photo)

The campus is now able to accommodate 800 students and is already running out of space, based on the demand.

Dr. Pinnock also informs that the CMI has entered into an MOU with the Sam Sharpe Teachers’ College where both institutions share the use of the campus.

“While we grow, our partners must also grow, so we are also training them at Sam Sharpe to provide specialised teachers in the areas of logistics and supply chain management,” he explains.

Dr. Pinnock says that through a franchise, a similar arrangement has been entered into with Knox Community College Mandeville Campus, Trench Town Polytechnic College and Hydel University College.

According to the Executive Director, it is tempting to fall into a comfort level and just cruise after developing a number of programmes, “but the market keeps changing. The course that you have this year will need to be refreshed next year”.

The Custom Processes, Freight Forwarding and Immigration course, he says, is a classic example, as approximately 60 per cent of the material had to be changed within a year as a result of the implementation of the ASYCUDA World system at Jamaica Customs Agency and the Integrated Information System at the Passport, Immigration and Citizenship Agency (PICA).

“You can’t have the training lagging behind the industry. We now need to have them moving in sync. We rely a lot on industry advisory groups to inform us of these changes, so that we can make the courses relevant,” he says.

Meanwhile, Minister of Transport and Mining, Hon. Mike Henry, who piloted the Bill in the Lower House, says the upgrade provides an opportunity for CMI to present itself as a niche market university to attract a greater number of foreign students.

He also states that with the CMI being accorded university status, it will enable the institution to access international grant funding.

He adds that the institution continues to make a significant contribution to the Jamaican economy by bridging the employment gap, with approximately 85 per cent of CMI graduates being placed in jobs within six months of graduation.

CMI is the only international entity approved for maritime training in Jamaica, with 80 per cent of the teaching/support personnel and 50 per cent of the Board of Directors drawn from organisations within the industry.

CAPTION: The Caribbean Maritime Institute (CMI) Cadets in parade. The CMI will now gain university status, following the passage of legislation in both Houses of Parliament.