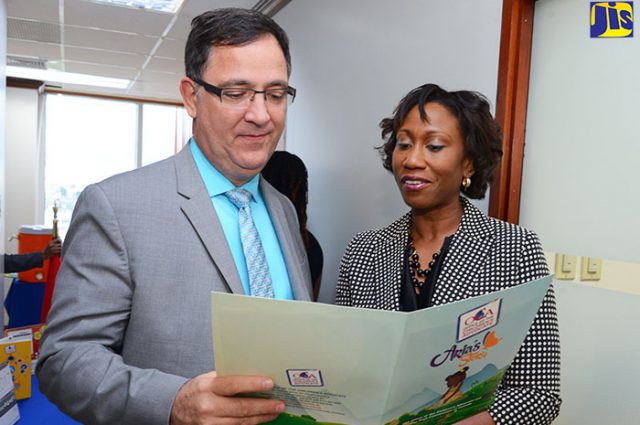 JIS: They suffer in silence, afraid to speak up. Suppressed by fear, these child-abuse victims are led to believe that they are powerless to do anything about their situation.

Their cries are muffled by those meant to protect them. Through ‘Aria’s Story’ these young victims are being empowered to speak up and speak out about abuse.

An eight year-old victim of abuse, Aria is an animated character, who was created to lend her voice to those suffering in silence by telling their stories for them.

The brainchild of the Office of the Children’s Advocate (OCA), Aria’s Story defines and highlights the nature and types of abuse that children experience, in order to provide those in abusive situations with information to take preventative actions and find solutions.

The initiative is being undertaken with funding support from the High Commission of Canada in Jamaica.

The online animated series, which began airing at www.ariastory.com, on February 13, chronicles Aria’s life of domestic servitude and sexual abuse at the hands of her uncle, when she is sent from her home in rural Jamaica to live with her “well off” aunt in Kingston.

Aria’s only escape from this reality is through identifying with characters from a book she finds while cleaning one day. This book features six characters that are grappling with different types of abuse.

Describing this innovative public-education campaign as a “social digital revolution” Children’s Advocate, Diahann Gordon Harrison said the aim is to encourage children to speak up when they have issues facing them.

“Our hope is for children in Jamaica to be empowered through the knowledge that they will garner, to be assured that they are not alone in their various situations, and for adults to be exposed to the realities that some of our children face and, ultimately, for them to model appropriate responses to these situations,” she said.

She was speaking at the media launch of the campaign at the agency’s offices in downtown Kingston on February 7.

As persons follow Aria’s Story over the next two months, they will get to see how Aria eventually gains her freedom, having learnt what each of the six children did to escape their situations and find avenues for help.

Helping Aria to tell her story is Stacy, who is 14 years old and experiences sexual abuse as well as domestic violence between her parents. There is also 15-year-old Yuri, who is being molested by an adult male relative; 12-year-old Lisa, who is a victim of bullying; and Brian, 12 years old, who is enduring child-on-child abuse.

The other characters are 15-year-old Tashanya, who is dealing with self-esteem issues, online predators and human trafficking; and 14- year-old Darell, whose story centres around violence against children by negative elements in society.

“The stories and the situations put the pain and the negative experiences children face into sharp focus, but end with that reverberating message of hope, resilience and the ultimate lessons that are taught through each episode,” Mrs. Gordon Harrison said.

The website will feature interactive content, where persons have the option to send direct messages, and bring issues to the OCA’s attention.

“We anticipate and hope, as well, that we may even get some reports coming out of the sensitisation and the empowerment that we hope to be bringing to persons to tell their stories,” Mrs. Gordon Harrison said.

She noted that there will also be ongoing social media awareness strategies that will accompany the unfolding of the episodes, pointing out, for example, that Twitter chats will be hosted at critical points across episodes to engage the public and to ensure that the larger messages are not being lost.

State Minister for Education, Youth and Information, Hon. Floyd Green, in endorsing the campaign, said it presents an innovative way to bring a number of issues to the fore “and to help our young people confront those issues… and also encourage our young people, when they are facing issues of abuse, to speak up”.

For his part, High Commissioner of Canada to Jamaica, His Excellency Sylvain Fabi, said the initiative was “a nice way to expose children to the fact that these things exist, especially when they are a victim of it; they know it’s not only them; this project will allow them to find solutions”.

Minister of Culture, Gender, Entertainment and Sport, Hon. Olivia Grange, and Opposition Spokesperson on Youth and Culture, Lisa Hanna, also welcomed the initiative, which is expected to reduce the incidence of child abuse in Jamaica.

Opposition Spokesperson on Information and the Knowledge Economy, Julian Robinson, also gave his full support for this initiative, noting he was pleased the OCA is embracing and using technology to help to address the issue of abuse.

“I think it is important to encourage persons who are suffering from abuse to feel confident that they can share their stories and also that they can talk out about the issues that are affecting them,” he said.

The Children’s Advocate said she is confident that Aria’s Story will serve to “channel the voice of change in communities across Jamaica in a fresh and relatable way”.

CAPTION: Children’s Advocate, Diahann Gordon Harrison (right), shares details of ‘Aria’s Story’ with High Commissioner of Canada to Jamaica, His Excellency Sylvan Fabi, prior to the recent launch at the Office of the Children’s Advocate (OCA) in downtown Kingston. The public-education campaign, which is an initiative of the OCA, is an online animated miniseries being rolled out across various social media platforms.