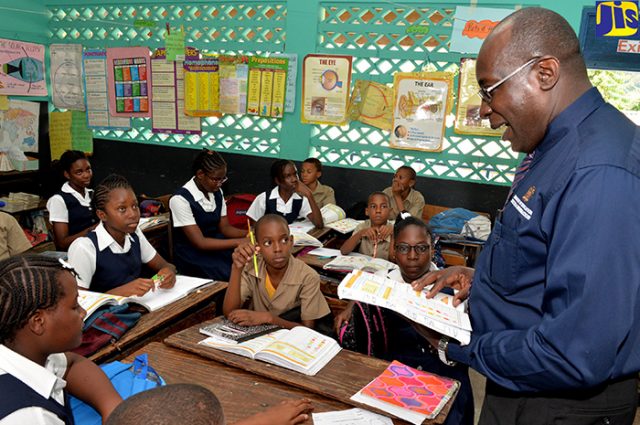 JIS: Four schools in the parish of Clarendon are to receive additional funding from the Ministry of Education, Youth and Information to undertake refurbishing and upgrading works.

Portfolio Minister, Senator the Hon. Ruel Reid, said a commitment has been made to provide the resources over the next two budget cycles.

He was speaking to JIS News after a tour of the institutions on Tuesday (January 16).

The projects to be undertaken include the building of an auditorium at Denbigh High; roof repair at Frankfield Primary and Infant; a new classroom block at Edwin Allen High to ease overcrowding; and enclosure of classroom space at Denbigh Primary.

Senator Reid, who was accompanied by senior administrators and technical staff from the Ministry, said the tour was important to get a first-hand look at the institutions and the work to be done while the funds are being put together.

During his stop at Denbigh High, he commended the administration for transforming the school into a “fine institution”.

He said the Ministry is committed to help fund the auditorium project, adding that the institution “deserves the facility”. He advised the school leadership to begin the preparatory work for the hall.

Senator Reid said he was pleased to see the school’s upgraded kitchen in operation, and to hear from the principal and staff that the investment has resulted in greater efficiency in the preparation of meals.

He told the students that they have no excuse for not attending school, as the Government is providing the resources for meals and transformation through the Programme of Advancement

Through Health and Education (PATH).

Meanwhile, he informed that the Government will be offering a full university scholarship to student, Twyla-Haye Bent, who, at the age of 10, sat English Language in the 2017 Caribbean Secondary Education Certificate (CSEC), scoring a grade two.

Stating that the achievement is exceptional, Minister Reid said “it is the type of success that must be used to show what the education system can do for personal and national growth. Education can empower people, and we want people to aspire for extraordinary things”.

The Education Minister also stopped at the Windsor School of Special Education, which serves students with intellectual disabilities between the ages of six and 18 years.

CAPTION: Minister of Education, Youth and Information, Senator the Hon. Ruel Reid (right), conducts a mathematics class at the Frankfield Primary and Infant School in Clarendon, when he visited the institution on January 16.