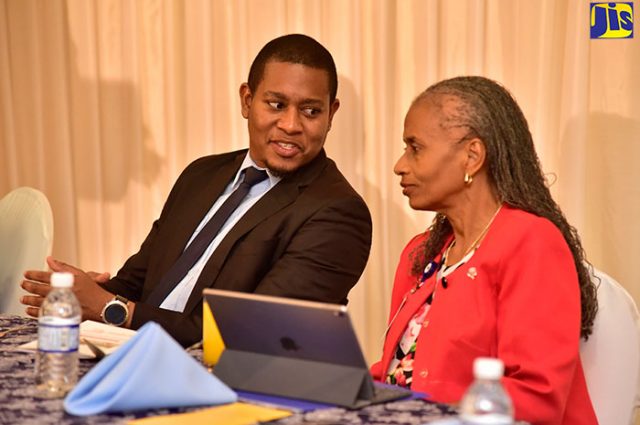 JIS: State Minister for Education, Youth and Information, Hon. Floyd Green, says curriculum reforms, which have been introduced by his Ministry, are being done to cater to the needs of the 21st century learner.

One such reform, Mr. Green noted, is the National Standards Curriculum (NSC), which aims to enhance the quality of education offered to learners and improve the general academic performance, attitude and behaviour of students.

“We started the NSC with our grades one and four students, and this curriculum centres around ensuring that our students learn to collaborate and are critical thinkers. These are the characteristics that our students need to survive in the 21st century,” Mr. Green said.

He was speaking at a breakfast meeting for principals, vice principals and heads of department, hosted by the University of the West Indies’ School of Education, at the Mona Visitors’ Lodge and Conference Centre on August 30.

It was held under the theme ‘Preparing teachers for 21st century learners’.

Mr. Green hailed the School of Education for hosting the timely forum, as it seeks to implement its own reform of the practicum component of its student-teacher training.

The reform, among other things, will enable student-teachers in their first semester of their final year to spend a longer, more enriching time in the classrooms in which they are assigned to teach before they graduate.

Meanwhile, Mr. Green informed that a stronger partnership between the Ministry and the University’s School of Education is needed, in order to overcome the challenge of placing student-teachers in schools.

“I think the University has to come in a bit earlier to meet with our team at the Ministry to work with our slate of schools to ensure they are amenable to student-teachers. This is a necessary path of the development of our learners,” he said.

Campus Registrar, Camille Bell-Hutchinson, in her remarks, noted that 21st century learners have to be equipped with skills that make them adaptable to the environment in which they live.

She said principals need to think differently about learning in the 21st century “to be able to support teachers when you go out there to help them become agents of change for 21st century students”.

Practicum Coordinator at the School of Education, Dr. Dian McCallum, said in a JIS News interview that the forum was geared at informing school administrators of the new changes to the student-teacher practicum this year and to enable the administrators to raise questions.

“When student-teachers go out to schools now they will be like full-time teachers because they are not only going to be teaching classes, but they should be attending staff meetings, going to departmental meetings and getting involved in parent-teacher conferences,” she said.

Direct and open communication is fundamental to the Ministry’s communications programme. It also enables us to build relationships with our stakeholders and avert misunderstandings that will lead to ill will and a poor image of our Ministry.The Communications Unit manages...
read more