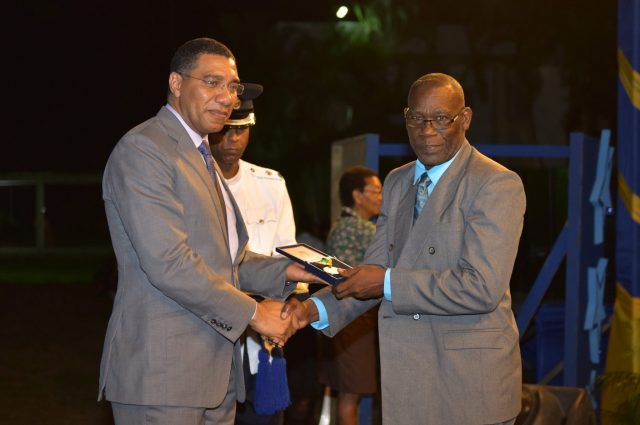 JIS: For over three decades, Rev. Owen Lambert, has been driven by a passion to educate and to uplift his community through teaching.

It is this passion and dedication which has now earned him the Prime Minister’s Medal of Appreciation for Service to Education, which was presented to him at a ceremony at Jamaica House on June 27.

Rev. Lambert, who was principal of Campbell’s Castle Primary and Infant School in rural Manchester for 27 years until his retirement this year, was recognized for his innovative approach to leadership, his creativity, community involvement and overall outstanding service as an educator.

In an interview with JIS News following the award ceremony, Rev. Lambert said he feels honoured and humbled by the recognition.

“I was not working for any honour. I was just trying to do my best. I feel humbled that someone would have seen that and recognized me for my efforts,” he said.

Rev. Lambert started his teaching career at Mandeville All-Age in the 1980s, followed by a stint at El Instituto de Mandevilla and later the Bethabra All-Age School, also in the parish.

In 1991, he became principal at Campbell’s Castle, which at the time had a student population of 40, as well as a number of underqualified teachers, poorly maintained facilities and parents who were less than enthusiastic about the prospects of the school.

Rev. Lambert said he worked to increase the population of the school, to a high of 180 currently, by changing the perception of the institution in the community. Total monthly attendance at the school was also improved, which was achieved by giving tokens to students who were consistently present.

He also embarked on a programme geared at educating parents about the value of ensuring children attend school regularly.

“The children had not been passing the exams, so I had to engage the parents on the importance of attendance and have them make a commitment to the education of their children. It was a long process, it did not happen overnight,” he said.

Attendance at the school moved from 50 per cent to an average of over 85 per cent.

He explained he also ensured that teachers furthered their studies to receive at least a Bachelor’s degree.

“It has been a fulfilling journey and I am happy with what I have achieved so far,” Rev. Lambert said.

Seeking to improve the physical condition of the school and by extension the outcomes of the pupils, he approached the Japanese Government in 2016 for help to carry out refurbishing work at the school, and received a donation. This donation was matched by the Ministry of Education, Youth and Information, which led to the first phase of improvement works at the institution.

A second phase of work is to commence, which will lead to an additional five classrooms, a computer room, principal’s office, a staff room, among other facilities.

Rev. Lambert said he is happy his successor will be able to benefit from the improvements to the school and is confident that the improved facilities will significantly impact teaching and learning at the institution.

“I am glad I am able to leave a legacy that the person who takes over leadership after me won’t have to start from scratch,” he said.

Under his leadership, Campbell’s Castle has seen steady improvements in both the Grade Six Achievement Test (GSAT) and the Grade Four Literacy Test.

In 2013, it won the prestigious Aubrey Phillips Memorial scholarship for the student with the highest (GSAT) average for primary schools in Manchester. The award was given to Anni-Vee Moore, who received an average score of 97.5 per cent.

The following year, Campbell’s Castle placed first in the Ministry of Education’s GSAT ranking in the Primary School section, for the parish of Manchester.

That same year, the institution also saw a 96 per cent pass rate in the Grade Four Literacy Test. Additionally the school has repeatedly won the Jamaica Teachers’ Association (JTA) district spelling competition for the Grades one to three category.

“I am a goal-oriented person, and one of my goals is always to make anywhere I am better than it was when I came there. I am driven by a passion for education and for service and as long as I have people who will work with me, I will guide the vision,” he said.

CAPTION: Prime Minister the Most Hon. Andrew Holness, (left) presents Retired Principal of Campbell’s Castle Primary and Infant School, Rev. Owen Lambert (right) with the Prime Minister’s Medal of Appreciation for Service to Education at the awards ceremony held on the lawns of Jamaica House on June 27.