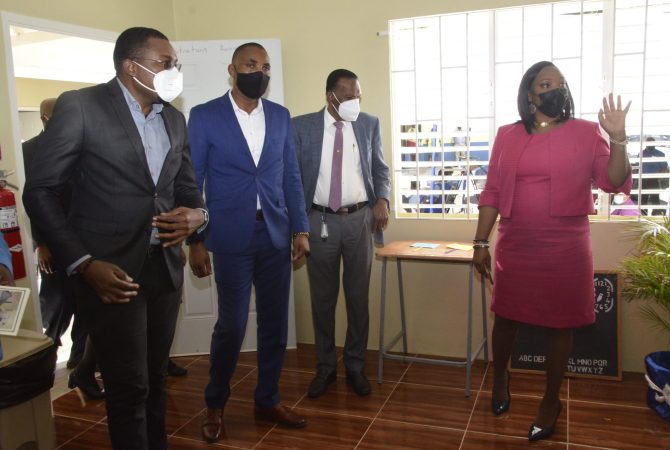 Minister of State in the Ministry of Education, Youth and Information, Hon. Robert Nesta Morgan, says the Government is exploring how it can improve the salaries of early-childhood practitioners on the island.

Addressing the handover ceremony of the Bethlehem Moravian College Early Childhood Centre of Excellence in Malvern, St. Elizabeth, on December 6, the State Minister said the Government is also seriously considering “how we can make more infant schools that are fully funded by the Government, where teachers are now a part of the Ministry of Education salary scale, paid for by the Government”.

“The Government recognises the importance of the early-childhood sector as a foundation for growth within the society, which then logically means that the Government must play a more interventionist role in the sector,” Mr. Morgan said.

“What [this] means is that we must start merging schools and create infant departments. Let’s say you have five basic schools that have 10 children each, you can now have an infant school with 50, and you can give the teachers who were at these basic schools the training, so that they can go to NCTVET and they can get certified or they can get their relevant [Caribbean Secondary Education Certificate] or if they wish, they can go to the bachelor’s degree, which I suspect, Bethlehem is very willing to accommodate them,” he added.

The early-childhood institution is located on the property of the college and was constructed by the Culture, Health, Arts, Sports and Education (CHASE) Fund, at a cost of $40.3 million.

The school will serve as a training facility for student teachers at the college who are specialising in early-childhood education.

Mr. Morgan  noted that the 160-year-old institution has continuously contributed to national development since its inception.

“I think it is fitting that the CHASE Fund and the Government chose to put this institution here, at an institution that has stability, and that has demonstrated excellence over the years,” the State Minister said.

Mr. Morgan also thanked the CHASE Fund for funding the construction of the building and underscored the importance of early-childhood education.

For his part, Chief Executive Officer of the CHASE Fund, Billy Heaven, said the  state-of-the-art facility will “allow for best practice in the delivery of early-childhood education”.

Mr. Heaven added that early-childhood education is too important to be left to chance.

Meanwhile, Chairman of the Board of Management at the Bethlehem Moravian College, Lowel G. Morgan, said that “against the background of the fallout in education gains globally, this building is a symbol of hope”.

“Hope not just for our institution in terms of an enhancement in our physical plant but hope in  relation to what we can accomplish,” he added.