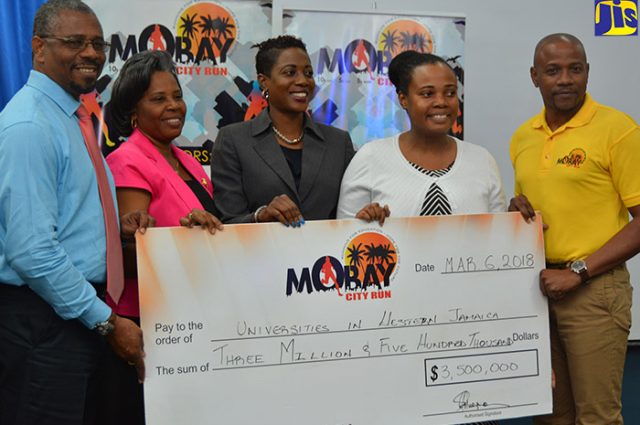 She emphasised the importance of this against the background of the early-childhood phase being regarded as one of the most critical stages of the education system.

“This is what we call the formative years. This is where the brain starts developing and where education – the art of learning – actually begins. These life basics include mental and physical development and are essential building blocks for life,” Mrs. Seymour-Hall added.

She was speaking at the presentation of cheques totalling $4 million to cover tuition for tertiary students as well as donations to four early-childhood institutions in western Jamaica.

The presentations, representing proceeds raised from the 2017 MoBay City Run 5K/10K road races, were made during a brief ceremony at the University of the West Indies (UWI) Western Jamaica Campus in Montego Bay on Tuesday (March 6).

Mrs. Seymour-Hall said it is important that educational development be spot on during the early stages of a child’s life, arguing that if something should go wrong, “it can have an effect on how the person grows and develops later” during adolescence and adulthood.

She further contended that after age 25 it becomes extremely difficult, if not impossible, to alter or change what has become ingrained.

“This is why we have to reach the little ones. Studies have shown that when you invest in early-childhood education you will get the desired and also quick results,” Mrs. Seymour-Hall added.

Two cheques totalling $4 million dollars were presented. One for $3.5 was handed over to representatives of the UWI’s and University of Technology’s Western Campuses, Sam Sharpe Teachers’ College, and Montego Bay Community College to assist needy tertiary students enrolled at those institutions.

The other cheque, for $500,000, was presented for four early-childhood institutions.

“It is also important to point out that of the over 100 certified early-childhood institutions in the country, a third of them are in western Jamaica. This is why it is important to have organisations like the MoBay City Run (organising committee) lending support to the sector in this region,” Mrs. Seymour-Hall said.

For his part, Acting Director for the UWI Western Jamaica Campus, Patrick Prendergast, welcomed the gesture by the MoBay City Run’s organisers, whom he lauded for displaying “both the vision and virtues” of investing in education.

“There is really no substitute for a good education, and it is very encouraging to have organisations like these assisting students to realise their dreams,” he added.

Since its inception in 2014, the charity run has raised and handed out more than $15 million to needy beneficiaries.