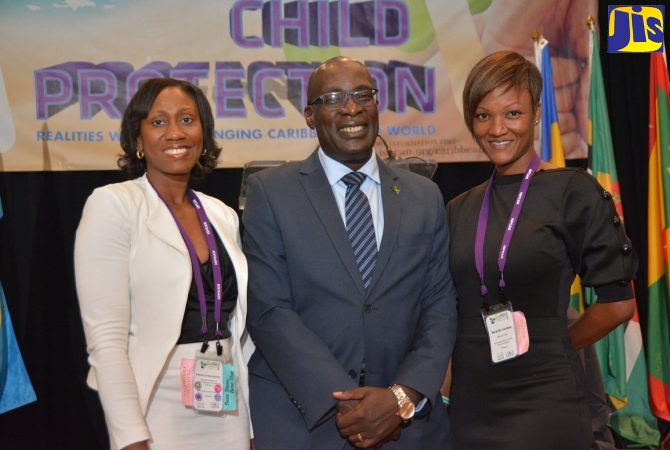 JIS: Minister of Education, Youth and Information, Senator the Hon. Ruel Reid, has called for a cultural shift to eliminate the practice of corporal punishment in Jamaica and the wider Caribbean.

“Corporal punishment is so entrenched in our culture and interwoven in our society that it has been accepted as a norm for many families and at a point in time in our schools. We have been able to repel that in large measure,” the Minister said.

Senator Reid was speaking at the closing ceremony of the 2nd Regional Caribbean Conference of the International Society for the Prevention of Child Abuse and Neglect (ISPCAN), held at the Hilton Rose Hall Hotel in Montego Bay, St. James, on Wednesday (December 5).

“I join the Prime Minister, the National Parenting Support Commission [NPSC] and, of course, the International Society for the Prevention of Child Abuse and Neglect in calling for a shift in culture and discontinuing the practice of corporal punishment in our region,” the Minister said.

According to Senator Reid, parents and caregivers must employ “permissible ways” to discipline children, rather than resorting to physical and verbal abuse, which he said, have long-lasting psychological effects.

“In many cases, violence begets violence. The cycle cannot be allowed to continue,” he underscored.

The Minister noted that laws are being strengthened to protect children from corporal punishment and other acts of violence.

He also restated the Government’s commitment to ban corporal punishment in schools, and issued a reminder to teachers that an executive directive is in place prohibiting the act.

“Our Prime Minister has been very strong on this point, and he has given clear directives and mandate for us to put it in a legislative form. Until I have been able to conclude that, I have the authority to outlaw it by giving an executive directive that corporal punishment is no longer allowable,” the Minister said.

In the meantime, Senator Reid urged the ISPCAN members to use insight and best practices garnered from the conference to effect the changes necessary to end violence against children worldwide.

“The change, therefore, starts here. The cycle of violence must end. It is my hope that every parent… whichever part of the globe you are from, will leave this conference determined to make the step to make the world a better place,” he said.

The conference was hosted in partnership with the Office of the Children’s Advocate (OCA), and reinforced research and collaboration among countries from around the world.

Other countries participating in the event included Switzerland, Ireland, the United Kingdom, Canada and the United States (US).

CAPTION: Minister of Education, Youth and Information, Senator the Hon Ruel Reid (centre), with Children’s Advocate, Diahann Gordon Harrison (left) and Editor at B3 (Bump, Baby and Beyond) Magazine and Parenting Lifestyle Consultant, Michelle Gordon, following the closing ceremony of the 2nd Regional Caribbean Conference of the International Society for the Prevention of Child Abuse and Neglect (ISPCAN), held at the Hilton Rose Hall Hotel in Montego Bay, St. James, on Wednesday (December 5).