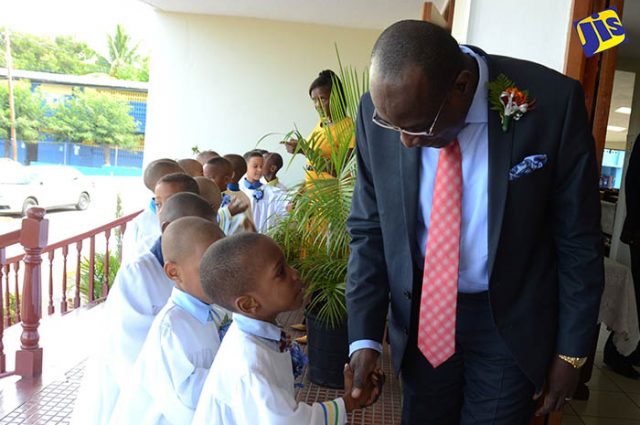 JIS:Minister of Education, Youth and Information, Senator the Hon. Ruel Reid, has called for continued support and partnership in the education of the nation’s students.

“There are some parents who think that all you have to do is to plant the children at school and leave it all up to the teachers,” the Minister said.

He was speaking at the graduation ceremony for 32 kindergarten students from the Sunrise Early Childhood Development Centre, in Kingston, on June 23, who received their school-leaving certificates, having completed their course of study.

The Minister said parents must not forget their role when the children come home after school. “You have to reinforce the values that the school is establishing,” Senator Reid emphasised.

Senator Reid said that for students to excel, the belief in excellence must be habitual.

“It must be that you want to excel every day, all the time at everything. That is the kind of superiority that we want for Jamaica, because if all of us as Jamaicans demand excellence from our government, students and  civil servants, that would be the foundation of a great nation,”  the Minister said.

He reminded the students that failure is not an option, and they should be committed to the tasks they set for themselves.

“Students have an equal responsibility for their success. It is a partnership among the school, parents and the students themselves,” he added.

Meanwhile, Principal of the institution, Ms. Yvette Knight, encouraged the students not to be defeated by challenges.

“Do your best always. Reach for the stars no matter how hard it seems and fly like a bird with the knowledge that a new journey begins,” she said.

The Sunrise Early Childhood Development Centre has provided many children with a sound academic foundation, with its unique instructional methods, materials, learning aids and equipment to meet the needs of children at the early-childhood level.

The National Standards Curriculum was introduced into the Education system in 2016 on a phased basis in Grades 1-9.  The curriculum was changed to reflect a greater focus on concepts and 21st century skills and competencies. Since the curriculum has...
read more