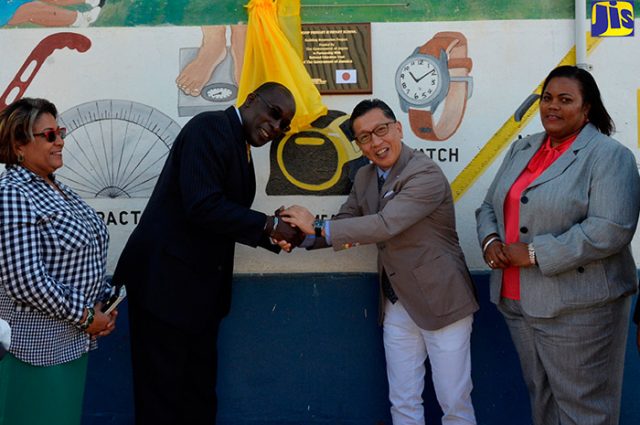 JIS: Minister of Education, Youth and Information, Senator the Hon. Ruel Reid, has commended the Embassy of Japan for its continued investment in Jamaica’s education system.

The Minister was making his keynote address at the official handover ceremony for the newly renovated and expanded facilities at the Warsop Primary and Infant School in Southern Trelawny on February 27.

The project, which falls under the Japanese Grassroot Human Security Projects, was funded by the Embassy of Japan at a cost of US$85,444.00 (J$10.3 million), in collaboration with the National Education Trust.

Mr. Reid said the investment would not only impact the direct beneficiaries, but the wider Warsop community and its environs, as has been the case with other schools in other parishes that have been provided with similar support.

He said the donation by the Japanese is in keeping with the Government of Jamaica’s thrust to continue to “invest in its people”.

In his address, Ambassador of Japan to Jamaica, His Excellency Hiromasa Yamazaki, said the Government of Japan is pleased to support Jamaica’s educational institutions, as education is one of the priority areas of the Official Development Policy of his country.

“As you will recognise from the name of our assistance scheme, by focusing on human security, it is Japan’s aim that no one should be left out of the development process and everyone should be protected and empowered to achieve sustainable development and inclusive growth,” Ambassador Yamazaki said.

“This holds true, especially as we have been assisting many other schools in Jamaica through building infrastructure and other rehabilitation works. It is the shared commitment by both our countries to the belief that education of our peoples is a pivotal cornerstone towards nation-building through continuous human resources development,” he added.

Chairman of the Warsop Primary and Infant School Board, Pastor Casbert Bryan, expressed gratitude to the Minister and Government for what he said was the unprecedented State support to primary education in the country.

“I have been in the education system as a Board Chairman and I have not seen so much resources being pumped into the primary schools,” Pastor Bryan said.

CAPTION: Minister of Education, Senator the Hon. Ruel Reid (second left) and Japanese Ambassador, His Excellency Hiromasa Yamazaki (third left), clasp hands following the unveiling of a plaque marking the official handover of the recently renovated Warsop Primary and Infant School in Trelawny on Tuesday, February 27. At left is Member of Parliament for Trelawny Southern, Marisa Dalrymple-Philibert and Principal of the school, Stephanie Codling-Smith.