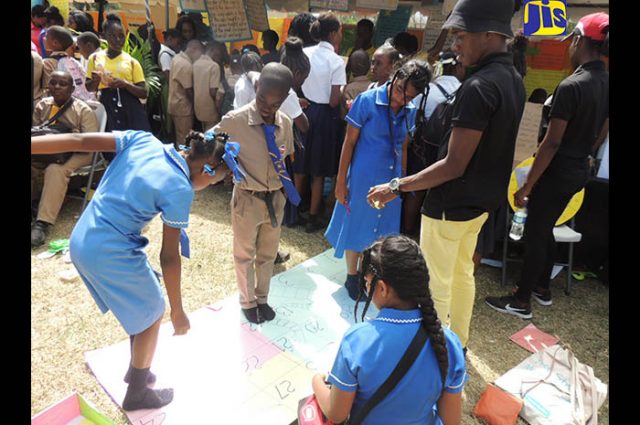 JIS: Minister of Education, Youth & Information, Senator the Hon. Ruel Reid, is hopeful about an improvement in the results from students who sit Mathematics in external examinations at both the primary and secondary levels.

In his address to students and educators at the annual National Mathematics Exposition on April 19, at The University of the West Indies (UWI), Mona, in recognition of National Mathematics Week, the Minister said Jamaica recorded an improvement in the performance of students who did Mathematics in external examinations in 2017, when compared to previous years, and he is working towards a greater increase being achieved.

“I’m happy to report that we are doing better and better in Mathematics right across the system. We are going to conquer this [low performance by some students], because in this 21st century, we have to be good at Mathematics, Science, Engineering and Technology. Once we have this good foundation to build on, it means that Jamaica can compete [globally] and use our skills to create new products and services that we can better market,” Senator Reid said.

“As I reported in our results last year, for 2017, all the categories of assessment showed that Mathematics was improving for both the Grade Four Numeracy Test and Grade Six Achievement Test (GSAT). We saw improvement of about seven per cent. For the Caribbean Examinations Council (CXC) and Caribbean Advanced Proficiency Examination (CAPE), it was 2.5 per cent,” he added.

With the increase in numbers, he said a team from the Ministry is working towards achieving continuous improvement in the future. This team was present at the National Mathematics Exposition hosting numerous mathematics games with students and teachers.

“Overall, we are seeing the system moving in the right direction, and we’re very happy that the new system that we have developed in terms of the math coaches, the support to schools, the training of our teachers, the additional resources, the national standards curriculum, all of these things are enuring to much better outcomes with Mathematics,” the Minister said.

Senator Reid pointed out that the number of students interested in Mathematics has also improved based on data from previous years.

The Exposition was held under the theme: ‘Math Counts’. Thousands of students between grade four at the primary level and grade 13 at the secondary level attended with their teachers.

In addition to the Ministry, other exhibitors had booths designed to show students and teachers how Mathematics relates to everyday life. There was also full participation from teacher-training institutions, public sector and private sector organisations, along with professional bodies.

The main highlight of the exposition was a ‘Math Extravaganza’, where students and teachers performed dub poetry, songs and drama pieces based on the theme. They were awarded prizes.

CAPTION: Students play interactive mathematics-based games at the National Mathematics Exposition, held at The University of the West Indies, Mona, on Thursday (April 19).

The Corporate Planning has as its responsibility coordinating the preparation and presentation of the annual Corporate Plan Report, collection and collation of reports and other necessary information for the quarterly corporate plan reports and monthly Performance Management review. The Unit...
read more