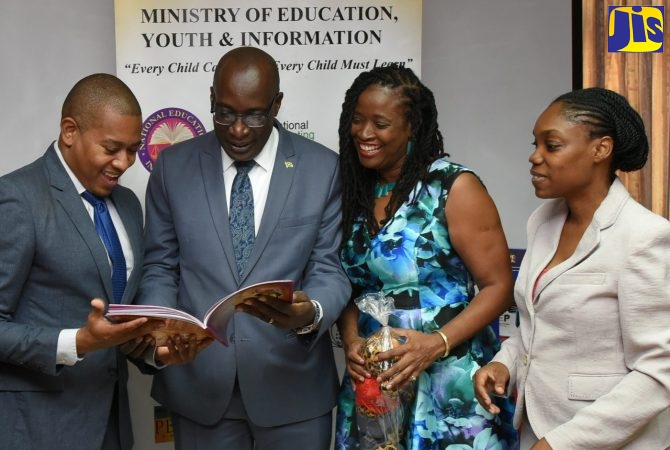 He is also calling on educators, parents, students and stakeholders of PEP to remain calm about the results they received, as they represent only a percentage of the total score students will receive after sitting the actual examinations as of 2019.

“The mock was administered on one component of the PEP, that is, the Performance Task, which accounts for 20 per cent of the total assessment,” the Minister said.

He was speaking at the Ministry’s quarterly press conference, held on Thursday (December 6) at his offices in downtown Kingston.

“The Ability Test and the Curriculum-Based Test (CBT) will account for the remaining 30 per cent and 50 per cent, respectively. Therefore, it is unreasonable, premature and a knee-jerk reaction to view the June 2018 Mock Performance Task as an indication of what will happen when the actual assessments are done in 2019. It is to be noted that the Performance Task and the Curriculum Based Test are based on content/curriculum material covered in grade six,” he noted.

He added that the Ministry and other examining bodies have no general practice or tradition of reporting on mock or pilot assessment results; therefore, there was no need to put the details of the Mock Exam, being only a per cent of the overall score, out to the public.

“Just for transparency, we did so, and as it turned out we should have perhaps had a session where we explain where the grading was going to be. Rather than that, we put them out there and people have their own interpretation,” he said.

The Minister also noted that the three levels or performance categories in relation to June’s Mock Performance Test, which is Standard Met, Standard Nearly Met and Standard Not Met, are not the same rubric/scoring/reporting scheme that will apply in respect of the actual examinations slated for 2019.

Senior Education Officer in the Students Assessment Unit, Ministry of Education, Youth and Information, Maryah Ho-Young, offered more clarity on how the grades will be scored for PEP as of 2019.

“In reporting the results of the Primary Exit Profile for each individual student, the Ministry of Education, Youth and Information has taken the decision to use what we call Scaled Scores, instead of percentage scores. For GSAT, in the Mathematics, Language Arts, Science, Social Studies and Communication Task, the schools [and] parents would typically see a percentage score. We’re moving away from that, as we move towards a 21st century assessment,” she noted.

Mrs. Ho-Young further explained that a Scaled Score is the conversion of a student’s raw scores from the various tests on to a Common Scale.

“Statistics and Mathematics are involved in doing that conversion. Examples of Scaled Scores used in other jurisdictions include the Caribbean Examination Council, with a scale of grades one to six [and] for SAT, as used in the United States of America, they use a scale of 400 to 1,600,” she said.

Mrs. Ho-Young said it is important for teachers, administrators and parents to understand what Scaled Scores are.

“Scaled scores are used to ensure consistency, seeing that the different tests are measuring different aspects, as well as they comprise a different number of questions,” Mrs. Ho-Young added.

The Teachers Financial Services Unit, popularly called Teachers’ Salaries, has as its responsibility the timely and accurate preparation of all salaries for Ministry-paid teachers. In executing this task the unit liaises with the Ministry of Education’s Regional Offices regarding any...
read more