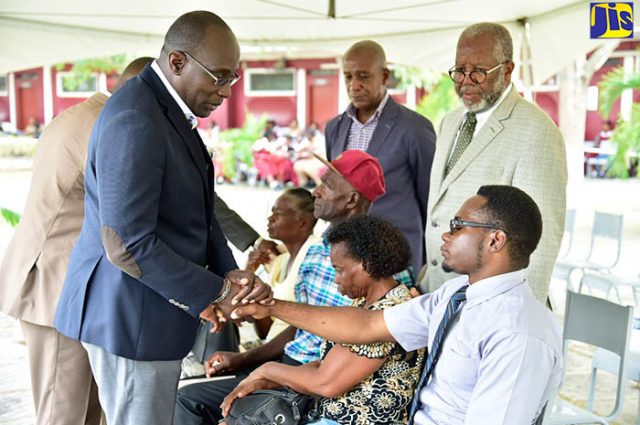 JIS: Minister of Education, Youth and Information, Senator the Hon. Ruel Reid, has expressed condolences to the family, colleagues and students of late teacher of Eltham High School, Shanice Lewis.

Ms Lewis passed away after a brief illness at the Spanish Town Hospital on April 10.

Speaking at a special assembly held in her honour on April 20, at the Spanish Town based institution, Senator Reid described the death of the Mathematics teacher as a “very significant loss”.

“God alone understands, and I want to say to students, notwithstanding this loss, since we are living, we must commit ourselves to be inspired by her diligence and hard work,” he stated.

The Education Minister further commented that Ms. Lewis was among the greatest professionals who served Jamaica, as teachers “give the greatest service that humankind can provide.”

“I pray, even in this moment, as we grieve on the passing of such an outstanding teacher, that the God will comfort our hearts and her death will inspire you to live more loving and kind with each other,” Mr. Reid said.

For his part, Interim Principal at the Eltham High School, Mr. Ricardo Bennett, described Ms. Lewis as a kind and patient teacher of Mathematics.

“She was passionate about enabling the school to become a better place for students to learn and for teachers to work. She had the gift of innovative thinking, a visionary spirit and the skills required to present the most difficult mathematical concepts in a simple way,” he said.

He added that even though she taught at the institution for only five months, “she was an excellent teacher who will be missed”.

As part of his visit to Eltham High, Minister Reid toured the various facilities at the school.

Currently, a new perimeter fence is being constructed and three new classroom blocks have been completed to accommodate students and teachers.