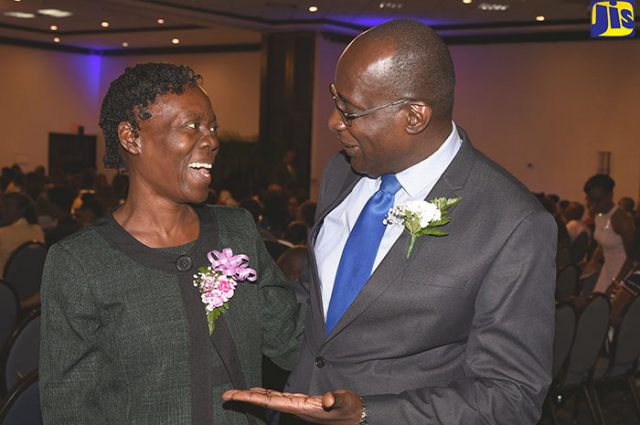 JIS: Education, Youth and Information Minister, Senator the Hon. Ruel Reid, is hailing teachers for their commitment to the improvement of students’ performance in various school assessments, and their increased participation in co-curricular activities.

The Minister was addressing teachers at the Jamaica Teachers’ Association (JTA) Golden Torch Awards ceremony, held at The Jamaica Pegasus hotel in New Kingston on July 5.

Senator Reid noted that the improvement in performance is reflected in the 2018 Grade Six Achievement Test (GSAT), which saw improvement over last year’s results in four of five subjects.

They include Language arts, Communication Task, Science and Social Studies.

The 2017 Grade Four Literacy and Numeracy Assessment also showed improvement, with increases in the percentage of students achieving mastery for both areas; and the Caribbean Secondary Education Certificate (CSEC) examinations, which recorded improved passes in 18 of 34 subjects at this level.

“So, on behalf of a grateful nation, please accept our sincere thanks. The entire Jamaica appreciates your service to our beloved country. Someone’s life has been made better because of you. You have touched the hearts and minds of thousands,” the Minister said.

JTA President, Georgia Waugh Richards in her remarks said it is important to recognise the “yeoman’s duty and task that our (teachers) have done”.

She described those teachers before her as “trailblazers” and noted that “a debt of gratitude” is owed to them because they have “laid very strong and very firm foundations”.

“You are the bedrock of the Jamaican education system. You are the standard-bearers. Every time you step into the classroom you work a little miracle. You open a mind that others would see as difficult, impossible to do. You give love even when you are not a recipient,” she said.

During the ceremony, 150 teachers from across the island with over 35 years of service to education were presented with awards.

The brainchild of educator and former JTA President, Ray Howell, the Golden Torch Award was first instituted by the JTA in 1991 and the first awards presented in 1993.

Each academic year, forms are sent to schools at the beginning of the second term for Principals to indicate the teachers on staff who satisfy the criteria.

The award is normally presented at a special function during the first week of July each year.