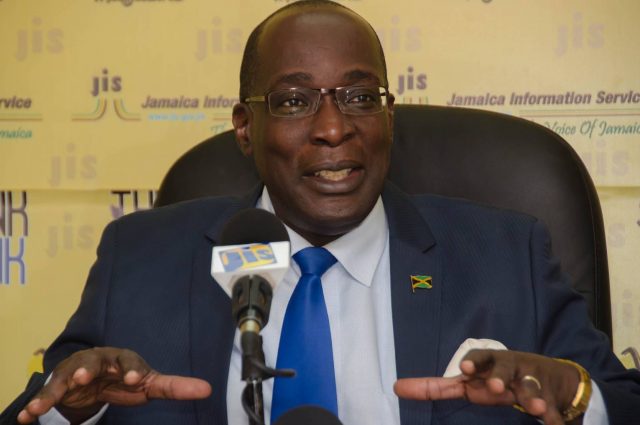 JIS: Minister of Education, Youth and Information, Senator the Hon. Ruel Reid, says he is satisfied with the Ministry’s achievements during his first 100 days in office and the support he has received from various stakeholders.

The Minister, who was addressing a JIS ‘Think Tank’ on June 21, said that among the successes over the period is the implementation of the Government’s tuition-free policy for secondary schools.

This, he said, has facilitated the reorganisation of contributions to schools and the provision of an additional $7,500 per student, while still allowing parents to make their contribution.

Over $1.4 billion in tuition support has already been given to schools, enabling their early preparation for the 2016/17 academic year.

Other initiatives at the secondary level include the launch of the Alternative Pathway for Secondary Level Education (ASPE), which will provide for additional and improved teaching programmes, including extension of the school year up to seven years.

The Career Advancement Programme (CAP) was also re-branded, with over 10,000 students ages 16-18 to be afforded the opportunity to complete their education with the necessary competencies and skills to pursue tertiary training or enter the world of work.

During the period, a decision was taken to implement a book rental scheme for students at sixth form, commencing in September 2016.

Senator Reid noted that at the pre-primary and primary levels a structure was established to revitalise the Early Stimulation Programme (ESP), which provides support for children from birth to age three.

At the tertiary level, Senator Reid informed that allocation to support students through the Jamaica Values and Attitude Programme (JAMVAT) was doubled and now stands at $233 million.

Senator Reid noted that safety and security of students is a priority of the Ministry and over $70 million has been provided for Behaviour Management, and Safety and Security programmes.

The allocation, he said, facilitated the staging of the first security and ethics conference in Jamaica earlier this month, and will support the establishment of more uniformed groups in schools and youth clubs, and the training of security liaison officers.

The National Values and Attitude campaign was also relaunched, with the Minister and Rev. Ronald Thwaites as co-chairs.

Turning to achievements under the youth portfolio, Senator Reid noted that a National Youth Policy is being finalised with support from the Commonwealth Secretariat.

He said there are ongoing discussions regarding support for the establishment of Jamaica Professional Youth Workers Association to ensure standardisation of work being done in the youth sector.

In addition, Youth Information Centres (YIC) have been re-branded to focus on innovation and entrepreneurship; the National Youth Advisory Council was re-established; and the National Youth Service (NYS) summer programmes were extended to cater for more young people.

The New Employment Opportunities for Youth in Jamaica (NEO-Jamaica) project was also launched in June to engage 10,000 unattached youth.

It is being spearheaded under the Youth Upliftment Through Employment (YUTE) initiative of the Private Sector Organisation of Jamaica (PSOJ), and involves partnership with the Ministries of Education, Labour and Social Security, and Science, Energy and Technology.

CAP has also been extended to the 19-29 cohort through partnerships with the Jamaica Foundation for Lifelong Learning, HEART Trust/NTA and the NYS.

In outlining some of the achievements under children services, the Minister said the residential childcare system is being reviewed to determine and document programme options and the types and classification of institutions operating within the sector.

There is also strengthening of the Office of the Children’s Registry’s ‘Break the Silence’ campaign and the establishment of a Transitional Living Programme for Children Living in State Care Project to provide accommodation and other support for children exiting the system.

Also, during the period under review, 14 Ministry Papers were tabled in the Houses of Parliament.

They are the proposed new assessments for various levels of the education system; the removal of pit latrines; update on the safe schools programme and uniformed groups; increase in tuition fees at the secondary level; Education System Transformation Programme (ESTP); Career Advancement Programme (CAP); National Standard Curriculum (NSC); Re-branding of the Youth Information Centres; Re-convening of the National Youth Parliament; Youth and Adolescent Policy; Infrastructure Development; Strategic Review of Residential Care for Children in State Care; Establishment of a National Youth Advisory Council; and strengthening and expanding the Break the Silence Campaign.

Minister Reid said the Government is committed to communicating regularly with the public; therefore Ministers are encouraged to hold monthly press briefings.