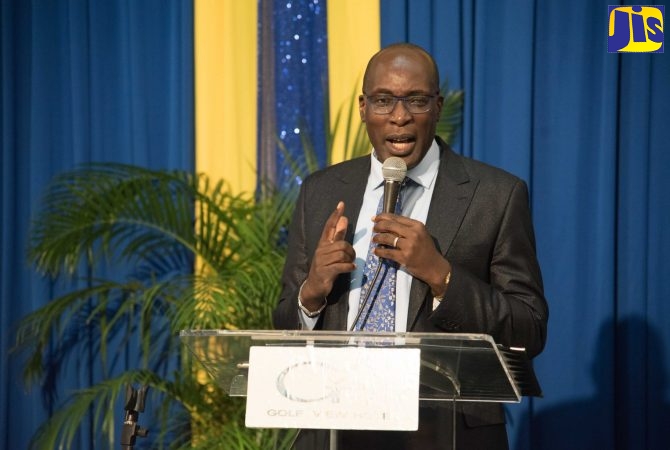 He was delivering the main address at NCU’s Alumni Homecoming Fundraising Banquet, held at Golf View Hotel in Mandeville, Manchester, on November 11.

“From a Christian perspective, if we know and appreciate that education is so important and the poor cannot afford it, to the extent that God has prospered us, we should give to those who can’t afford it,” Senator Reid said.

Close to US$80,000.00 was pledged by members of the alumni association during the banquet for the RESCUE programme, which targets students who have the desire to get a university education but lack the financial resources to do so.

Senator Reid said that NCU’s programme to ‘RESCUE’ students is commendable, adding that educators want to impact the lives of everyone.

“From a spiritual point of view, the Lord has said to us, those whom he has prospered are to give of what they have to others, so they can be developed to become wholesome and productive citizens,” the Minister said.

Senator Reid said that for many years, on average, only 30 per cent of the population was able to get beyond all-age school, and that between 55 and 67 per cent of the current workforce of 1.3 million do not have the equivalent of secondary certification or higher, largely because they did not get to complete their education.

“The economy has changed, so there has to be a correspondent shift in how the workforce is prepared, and the Christian community has to understand that reality also. For the economy to function effectively, we need more trained and certified individuals,” the Minister said.

Senator Reid said the church has a part to play because if many of the persons waiting to be educated are allowed to fall through the cracks, they will become uneducated and unskilled people who will turn to crime.

“As a Christian community, if we can’t solve the social problems, nobody else can,” the Minister said.

Meanwhile, President of NCU, Dr. Lincoln Edwards, said the university wants to keep the RESCUE agenda uppermost in everyone’s mind, through a three-year campaign aimed at raising funds for scholarships for needy students, and to construct a well-needed dental hygiene and community outreach centre to treat the needs of the region and to finance special NCU initiatives in at-risk communities.

He said another critical element of the RESCUE initiative is to help reduce crime and violence in Jamaica, as the more students that are enrolled at NCU, the less will be available to be influenced by criminal elements.

CAPTION: “From a Christian perspective, if we know and appreciate that education is so important and the poor cannot afford it, to the extent that God has prospered us, we should give to those who can’t afford it,” Senator Reid said.

Content coming soon.Please check back in a little while.
read more