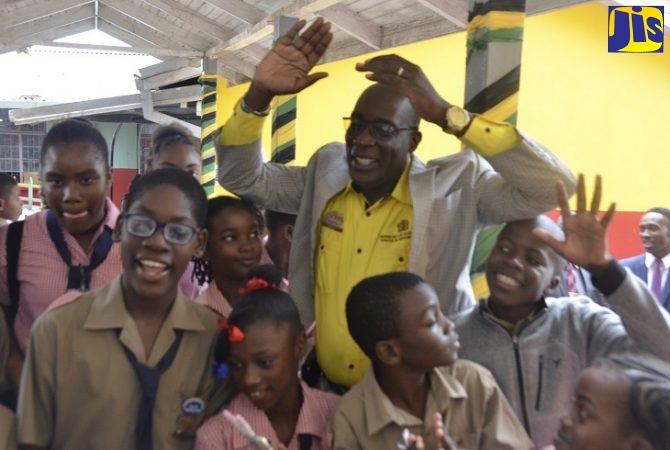 JIS: Minister of Education, Youth and Information, Senator the Hon. Ruel Reid, is reporting a successful administration of the first sitting of the Primary Exit Profile (PEP) examination.

The Minister and a high-level team from the Ministry visited several schools in St. Ann on Tuesday (February 26) to get a first-hand view of the administration of the Ability component of the examination, which has replaced the Grade Six Achievement Test (GSAT).

Senator Reid also offered words of encouragement to the first cohort of grade-six students to sit the examination, and also got feedback about their handling of the test.

“Today (February 26) is the historic first sitting of the Primary Exit Profile (PEP), and so it would have been expectant of me to visit a number of schools at random to see how ready and prepared the system was for the first sitting, and how the students would have performed in this first sitting,” the Minister told journalists.

“I am very impressed, very proud of my team at the Ministry of Education, the principals and the teachers. All the schools have been well prepared. Students are very confident and, overall, I think Jamaica can be very proud,” Senator Reid added.

He reiterated that the Ministry pulled out all the stops to ensure that students and teachers were adequately prepared for the examination, with adequate resources being dispatched to primary-level institutions to boost preparedness.

“The Ministry went all out to ensure that all the issues, all the needs, all the fears that persons may have had, we attended to those. It speaks to how we as a people, once we have an objective to be achieved, if we just come together and work in partnership in the interest of our children and in the interest of Jamaica, the country will be a much better place,” Senator Reid said.

He further noted that the Ministry received no report of mishaps throughout the administration of the examination.

“We have received no reports of any glitches. Not on our side. We have had one or two reports of students being late in terms of getting to their centre, but it is not a system problem that we would have encountered,” the Minister informed.

In the meantime, Principal of the Hoolebury Primary School in Scarlett Hall, Runaway Bay, St. Ann, Leon Lamont, told JIS News that the students were adequately prepared for PEP, and reported no glitches in the administration of the examination.

“As a principal and parent, I had a concern regarding the initial staging of the examination. I was a bit worried that it would have been harder than the students could manage, but again, with the resources put in place by our Minister (Senator Ruel Reid), and with the examination coming to completion today (February 26), my son said the examination was easy and everyone who came out said it was easy or manageable,” Mr. Lamont said.

Over 40,000 students were registered to sit the examination at 1,104 centres across the country.

The performance tasks – Language Arts and Mathematics – will be administered on March 27 and 28, respectively, while the final component of the assessment – the curriculum tests, to include Language Arts, Science, Mathematics and Social Studies – are slated for April 16 and 17.

CAPTION: Minister of Education, Youth and Information, Senator the Hon Ruel Reid, celebrates with students of Hoolebury Primary School, Scarlett Hall, Runaway Bay, St. Ann, following their completion of the first sitting of the Primary Exit Profile (PEP) Examination, during a visit to the institution on February 26.