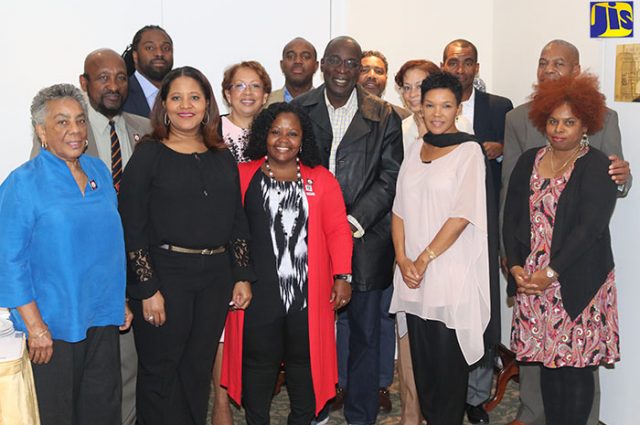 JIS: Education, Youth and Information Minister, Senator the Hon. Ruel Reid, has called on the Union of Jamaican Alumni Associations (UJAA) in the United States to partner with the Government in the establishment of a national school-bus system.

He noted that the Administration is looking to acquire 1,000 school buses over the next five years, and challenged the UJAA to match the provision.

The Education Minister was addressing members of the UJAA Executive at a breakfast meeting at the Kimberly Hotel in Manhattan, New York, on Sunday (April 9).

Senator Reid, who was accompanied by Jamaica’s Ambassador to the United States, Her Excellency Audrey Marks; Consul General, Trudy Deans; and his Adviser, Sharon Hay-Webster, said he is determined to develop a proper system for the transportation of students across the island.

Ambassador Marks pledged to work with the alumni associations on an ‘Adopt a School Bus Programme’, which would go towards the initiative.

Senator Reid noted that once the national programme comes on stream, rural students would benefit from the same level of subsidy enjoyed by students in the Corporate Area who use the Jamaica Urban Transit Company (JUTC) buses.

Turning to the shift system, the Minister informed that there are 47 high schools that are still on shift, and the Government needs some $13 billion to construct 17 new schools in order to eliminate the system in the country.

He pointed out that five schools needed to be dealt with as a matter of urgency, as they are “bursting at the seams”.

These are Old Harbour High in St. Catherine; Ocho Rios and Brown’s Town High schools in St. Ann as well as one school in Montego Bay and another in Manchester.

Minister Reid lauded the overseas alumni associations for their consistent contribution to the island’s education system over the years, noting that the support has assisted many students, as well as various institutions, for which the nation is eternally grateful.

The UJAA is a non-profit umbrella organisation of alumni associations of Jamaican educational institutions with a mission to promote excellence in schools across the island.