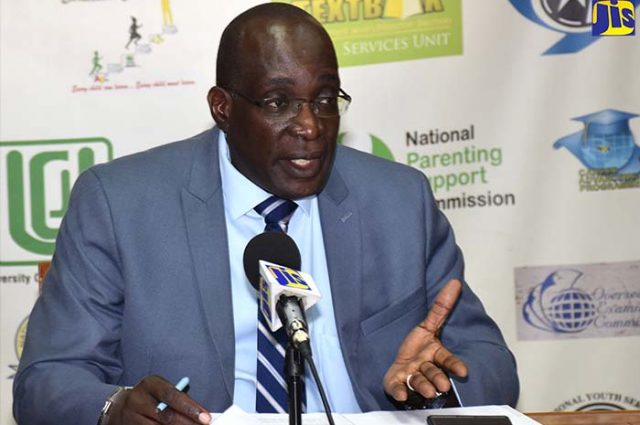 JIS: The Ministry of Education, Youth and Information is collaborating with the Jamaica Constabulary Force (JCF) in the staging of an inaugural Anti-Gang Week, aimed at steering youth away from criminal activities.

It is part of a special partnership involving the Ministry and JCF’s Counter-Terrorism and Organised Crime Investigation Branch (C-TOC) to engage at-risk youth using a more proactive approach.

Details of this initiative and other areas of collaboration were discussed at a high-level strategy meeting involving portfolio Minister, Senator the Hon. Ruel Reid, and other Ministry officials; and Head of C-TOC, Assistant Commissioner of Police (ACP), Fitz Bailey, at the Ministry’s National Heroes Circle location on Monday (April 16).

ACP Bailey told JIS News that the date for the event is yet to be finalised, but noted that the team is “looking at sometime in May”.

He informed that the week will be focused on activities that promote diversion from gangs, and will not only target youth in school but also at-risk youth outside of the school system.

“We want to divert people from engaging in things that are not consistent with the law and proper morals and principles. We believe that if we can reach our children… we will go a far way. It is about changing the psyche of the youth,” he said.

Director of Safety and Security in Schools, Assistant Superintendent of Police, Coleridge Minto, told JIS News that this preventive measure – targeting young persons who are at-risk and potentially at-risk – is necessary, given research that shows that gangs recruit children as young as age eight.

The week of activities, which is expected to engage non-governmental organisations (NGOs), the church, civic groups and other stakeholders, will entail town hall meetings, as well as sensitisation sessions in schools.

This partnership, for which an agreement is to be signed soon, is one of several areas of collaboration between the Ministry and JCF.

Other areas include public education on the responsible use of social media, other anti-gang initiatives, and special presentations by C-TOC to school officials.

The activities are to be funded under the US$3-million Safe Schools Project of the United States Agency for International Development (USAID).