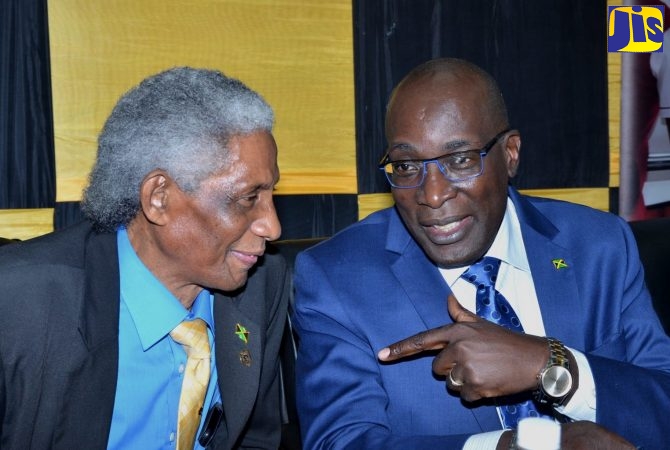 JIS: The Ministry of Education, Youth and Information is dedicated to providing the requisite resources to ensure sustained improvement in student performance in mathematics.

Portfolio Minister, Senator the Hon. Ruel Reid, said that comprehensive and targeted interventions are being implemented at the primary and secondary levels in keeping with this objective.

He noted that the Ministry continues to sustain implementation of the mathematics marketing campaign ‘Math Counts’ using social media, print media and advertisements on radio and television, as well as the annual observance of Mathematics Week in March.

He said the national mathematics exposition, which is the main event for Math Week, has seen attendance grown from 2,500 in 2013 to more than 8,000 students and teachers last year.

“These programmes are aimed at helping all Jamaicans to see the importance and relevance of mathematics to their everyday lives and the country’s economic growth and development,” Senator Reid noted.

He noted that annual training sessions are facilitated for new principals and heads of departments.

Senator Reid was speaking at the launch of The Mico University College’s International Mathematics Summit at the institution’s premises on Marescaux Road, St. Andrew, on January 30.

Mico is collaborating with the Education Ministry to host the inaugural event from March 25-27 under the theme: ‘Mathematics for Economic Growth and Job Creation’.

The summit, which will be integrated into the Ministry’s National Mathematics Week, will provide a forum for exploring, analysing and consolidating international best practices in the teaching of mathematics.

CAPTION: Minister of Education, Youth and Information, Senator the Hon. Ruel Reid (right), in conversation with Pro-Chancellor and Chairman of the Board of Directors, The Mico University College, Professor Neville Ying, during the launch of the Mico International Mathematics Summit at the institution’s premises on Marescaux Road, St. Andrew, on January 30.