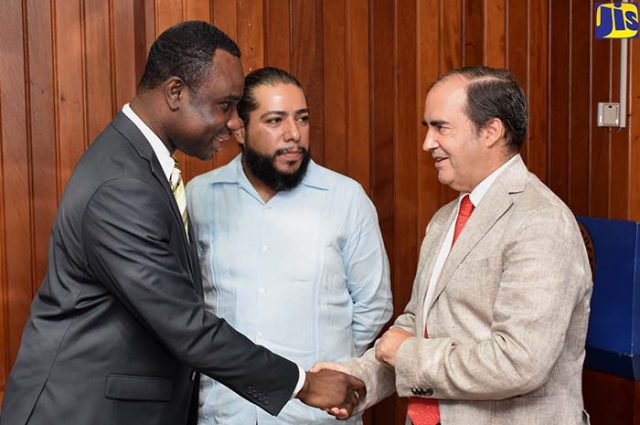 JIS: The Ministry of Education, Youth and Information, and the Mexican Embassy in Jamaica have partnered on a project to further boost the Government’s capacity to digitally preserve the nation’s priceless archived records and historical data.

The initiative, titled ‘Project for Capacity Development in Digital Preservation for Records and Information Professionals’, was launched by Permanent Secretary, Dean-Roy Bernard, and Mexico’s Ambassador to Jamaica, His Excellency Juan José González Mijares, during a ceremony at the Ministry in Kingston on Thursday (July 19).

The project aims to develop a cadre of public-sector records and information management (RIM) professionals with the requisite digital preservation skills who are capable of training other persons in this area; and to create a user manual that will be integral to the process.

Local stakeholder partner engagement will be led by the Jamaica Archives and Records Division, an agency of the Education Ministry, in collaboration with the Cabinet Office and the Ministries of Finance and the Public Service, and Foreign Affairs and Foreign Trade.

Representatives of the General National Archives of Mexico will undertake study tours to conduct system assessments at a number of ministries, departments and agencies (MDAs), and training of personnel from July 19 to 24.

Speaking at the launch, Mr. Bernard said the project is being undertaken against the background of a need, based on a study, to boost persons’ capabilities to professionally preserve records and information and the extent to which information and communication technology (ICT) is leveraged in this regard.

He explained that the training will be based on principles and concepts of digital preservation in relation to migration, encapsulation and emulation of digital records.

The subject areas, the Permanent Secretary further outlined, will include records capture; records classification and indexing; metadata assignment; maintenance and utilisation; appraisal and disposition, including retention schedules; preservation processes; and methodologies for training trainers, among other areas.

Mr. Bernard said the project will involve an additional capacity-building exercise and a study tour of the General National Archives of Mexico by local participants at a later date.

“By implementing this project, government efficiency and service delivery will improve, making Jamaica an enabling business environment. This project is aimed at modernising the public service and making it more efficient and democratic. Additionally, it is consistent with (the goals of) our Vision 2030 Jamaica long-term National Development Plan,” he added.

For his part, Ambassador Mijares said the project represented a continuation of scientific and technical cooperation, which the Mexican Government has extended to Jamaican institutions over several years in a number of areas.

These, he pointed out, include agriculture, data management, disaster risk management, and biotechnology.

“This particular project for capacity development and digital preservation with the Jamaica Archives and Records Department… is part of our broad technical and scientific cooperation programme, which will be renewed in order to continue with activities in 2018 and 2019,” he added.

CAPTION: Permanent Secretary in the Ministry of Education, Youth and Information, Dean-Roy Bernard (left), greets Mexico’s Ambassador to Jamaica, His Excellency Juan José Gonzalez Mijares (right), at Thursday’s (July 19) launch of the ‘Project for Capacity Development in Digital Preservation for Records and Information Professionals’, at the Ministry in Kingston. At centre is Director for Information Technology at the General National Archives of Mexico, Erick Cardoso Espinosa.

The Finance Division provides financial and accounting services to support the Ministry.  The Division provides guidance for all public educational institutions,  MoEY agencies and the Regional Offices, and manages the funds provided in the Estimates of Expenditure. The unit is...
read more