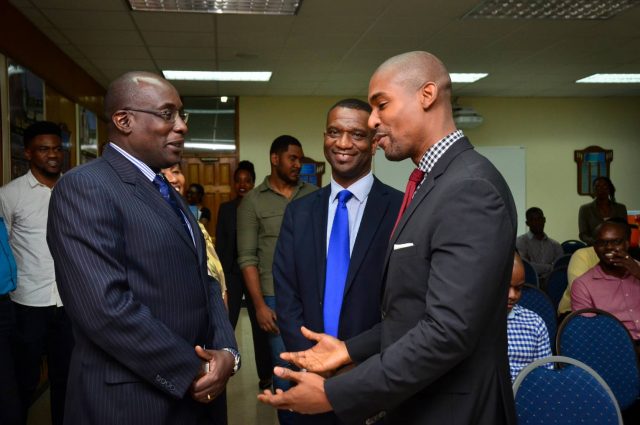 JIS: The Ministry of Education, Youth and Information and BAU International University in Washington, D.C. have partnered to provide 107 scholarships for student teachers to pursue undergraduate and graduate programmes at the institution under a three-year Memorandum of Understanding (MoU), valued at $378.2 million (US$3 million).

The MoU will additionally see the University hiring 200 Jamaican English language teachers for its network of schools located in the United States and several countries globally, for the 2018/19 academic year.

The partnership resulted from discussions that Portfolio Minister, Senator the Hon. Ruel Reid, had with BAU University Board member, Paul Brunson, in Washington, D.C. between 2016 and earlier this year.

Jamaica’s Ambassador to the United States (US), Her Excellency Audrey Marks, and the Ministry’s newly appointed International Donor Consultant for the Jamaican Diaspora in the US, Gail Dunwell, who works closely with the National Education Trust, were also instrumental in initiating the partnership.

The Minister said the partnership was welcomed in light of the high cost of education, particularly at the tertiary level.

Senator Reid said although the Ministry has been increasing funding for the sector, “there is always room for more support”, and in this regard lauded BAU University for partnering with the Government.

“This MoU is the beginning of what we expect to be a very long and lasting positive relationship. We are certainly looking at how we can provide more scholarships to our tertiary students, (particularly) our student teachers, and other youth who want to pursue higher education,” the Minister said.

For his part, Mr. Brunson said the initiative’s genesis dates back 10 years when he met his late grandfather who he learnt was Jamaican.

Mr. Brunson said the knowledge of his heritage was the primary reason why he sought to see how best he could make a tangible and meaningful contribution to Jamaica.

To this end, Mr. Brunson said he made representation to the University’s administration and successfully lobbied their support in March 2016 which resulted in the MoU’s crafting.

“So for all these reasons and more, I am excited and I am proud. This, indeed, is only the beginning of this relationship,” he added.

In his remarks, Dr. Pinnock, said the initiative was a “perfect fit” with the Government’s national focus for education.

“I think this will go a far way in building our resources as we try to graduate more persons from tertiary education in Jamaica. A more educated nation is a more peaceful nation, a more prosperous nation (and) a bigger and better nation,” he added.

The Washington, D.C. Campus is part of the BAU Global Network, spanning three continents that has been providing higher education for over 15 years, with offices in Toronto, Canada; Berlin, Germany; and Hong Kong, among other locations.

Its flagship campus is Bahcesehir University in Istanbul, Turkey, which has eight faculties, a school of languages, and two vocational schools.

CAPTION: Education, Youth and Information Minister, Senator the Hon. Ruel Reid (left), converses with BAU International University Board Member, Paul Brunson (right), during Thursday’s (November 30) signing of a three-year Memorandum of Understanding (MoU) valued $378.2 million (US$3 million) that will facilitate the provision of 107 scholarships to Jamaican student teachers, tenable at BAU which has campuses in the United States and other countries globally. The signing took place at Mico University College in Kingston. Looking on (at centre) is the President of Mico, Dr. Asburn Pinnock.