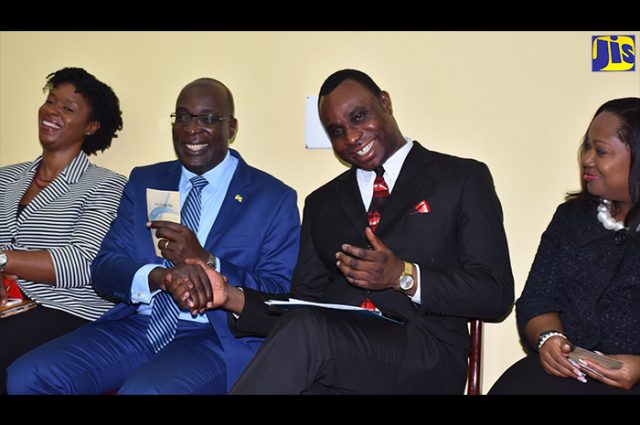 JIS: The Ministry of Education, Youth and Information will be implementing an initial one-year campaign to encourage more Jamaicans to embrace mathematics.

The objective is to promote the importance of mathematics to national development and change attitudes towards the subject.

Permanent Secretary in the Ministry, Dean-Roy Bernard, made the disclosure at the official launch of National Mathematics Week on Monday (April 16) at the University of the Commonwealth Caribbean, St. Andrew.

Mathematics Week is being observed from April 15 to 20, under the theme ‘Math Counts’.

Mr. Bernard noted that the main objective of Mathematics Week “is to help to change the attitude and views of students, teachers and, of course, the wider society about the subject”.

He said that the Mathematics Unit, through its public education initiatives, workshops and seminars, is working to make the subject more appealing and reinforce the idea that maths counts.

The Permanent Secretary noted that while there have been some improvements at the primary level, the current levels of performance in the subject remain a concern.

“So, to address these concerns, we are broadening the programmes with the aim of changing long-standing fears and misconceptions about the subject,” he said.

For his part, Portfolio Minister, Senator the Hon Ruel Reid, noted that the Ministry continues to work to improve performance in mathematics at all levels of the school system.

He noted that the National Standards Curriculum, which is being introduced from grades one to nine, is designed to facilitate greater levels of application in learning, with emphasis on project-based and problem-solving activities to facilitate enhanced learning outcomes.

Senator Reid said that at the primary level, the Ministry has recorded improved performance of students in the Grade Four Numeracy Test as well as in the Grade Six Assessment Test (GSAT).

Activities for Mathematics Week include a Maths Road Show to be held on April 17 at the Neville Antonio Park in Port Antonio, Portland, under the theme ‘Maths in your World’.

The event will engage members of the public in identifying areas in their everyday life where they are using maths.

The main event for the week will be the staging of a National Mathematics Exposition on Thursday, April 19 at the University of the West Indies’ (UWI) Mona campus from 9:00 a.m. to 4:00 p.m.

The expo is intended to provide students, teachers and parents with an opportunity to interface with maths in the real world.

The day’s activities will include a maths extravaganza from noon to 2:00 p.m., which will feature cultural performances under the ‘Math Counts’ theme.

Several exhibitors will be on hand to demonstrate how maths applies to their profession or the industry in which they operate.

CAPTION: Minister of Education, Youth and Information, Senator the Hon. Ruel Reid (second left), exchanges pleasantries with Permanent Secretary in the Ministry, Dean-Roy Bernard, at the official launch of National Mathematics Week on Monday (April 16) at the University of the Commonwealth Caribbean, St. Andrew. Sharing the moment are National Mathematics Coordinator, Dr. Tamika Benjamin (left); and Communications Officer, Shipping Association of Jamaica, Monique Morrison. Mathematics Week is being held from April 15 to 20 under the theme ‘Math Counts’.