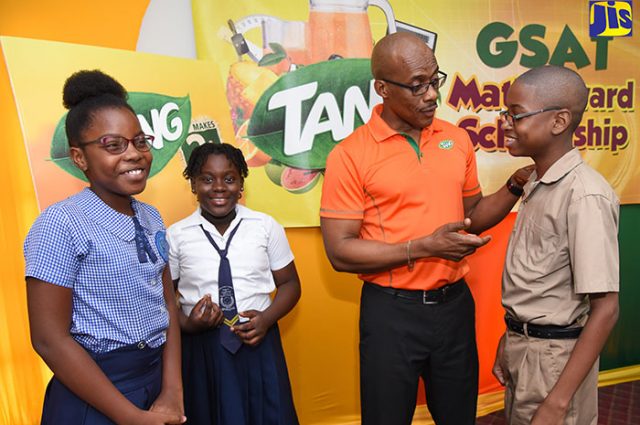 JIS: Mathematics Coordinator in the Ministry of Education, Youth and Information, Dr. Tamika Benjamin, is calling for private-sector partnership in the thrust to get more students to embrace mathematics.

“We want to encourage members of the private sector, who are willing to come on board through a public-private partnership, in supporting us as we continue to push for all Jamaicans to recognise that mathematics is important in our everyday lives,” she said.

She argued that “if we are going to take our country to a place where the average individual is going to be able to access jobs that pay well… we have to ensure that everyone is competent in mathematics”.

“For many of the fields, whether traditional or non-traditional, people need to be mathematically competent,” she emphasised.

Three students – Vitannia Bedward, Khadedra John and Tai Grant – were presented with scholarships valued at $50,000 each for scoring 100 per cent in mathematics.

Vitannia, who attended Mico Practising Primary and Junior High in St. Andrew; and Khadedra, from Southborough Primary in Portmore, St. Catherine, will be attending Immaculate Conception High School in September.

Tai, who attended Black River Primary in St. Elizabeth, will be moving to Munro College.

Dr. Benjamin commended the students for the excellent work, so too the teachers, parents and others who helped to lay a strong foundation.

She also praised TANG for its continued support to education through the scholarship programme.

“TANG wants to help the Ministry of Education to remove the stigma and fear often associated with maths by providing incentives to our students to shine in the subject,” she said.