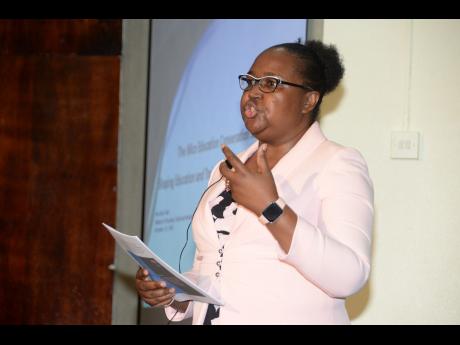 GLEANER: Chief Education officer in the Ministry of Education, Dr Grace McLean, has said the development of the education system in Jamaica is currently “at a good place,” as she recently tracked the country’s preparedness to meet global standards.

Dr McLean was representing Minister of Education, Youth and Information Senator Ruel Reid recently at the third in a series of conversations about education at The Mico University College in Kingston, which was organised with support from The Jamaica National Group. The conversation was centred on the theme ‘Education and Training: Key Drivers for Economic Growth and Job Creation’.

“I have been in the ministry for nine years plus, and I would say that given all the strategies we have developed; the number of activities which we have undertaken; and, all the papers that we have put together, I can now say that the ship has turned around and is moving in the right direction,” Dr McLean stated, extolling several initiatives the Government has undertaken, and will implement, to strengthen education and training to bring it in line with global and local demands.

Dr McLean said the education of Jamaican children now begins from as early as three months old and continues until 18 years old. It formerly began at age three.

To underscore her point, she said the Government is fully supporting 126 early-childhood institutions, now called ‘brain builder’ institutions, through tuition, nutrition and salaries for trained teachers, among other areas, to better cater to the development of children.

She adds that the ministry is also moving to increase its investment in kindergartens which cater to children three to five years old. Dr Mclean further stated that the Government currently supports 400 of some 2,800 of these institutions but should, in another six years, take control of about 70 per cent of these facilities.

Addressing the implementation of the National Standards Curriculum and the Primary Exit Profile (PEP), which has replaced the Grade Six Achievement Test, the chief education officer expressed that she was happy about the current debate surrounding the readiness of the new school-leaving assessment.

She argued that the implementation of PEP was necessary to support the introduction of the curriculum standard.

“If we introduced the National Standards Curriculum and we never had a commensurate assessment to wake up the Jamaican people; and to wake up our parents, to see how important it is for our students to learn 21st century skills of collaboration, critical thinking, creativity and communication, then perhaps we would not have seen a groundswell,” she maintained.

Dr McLean said children are being taught to examine, assess, think and develop ideas to meet higher standards of thinking and functioning.

Reducing The Cost Of Tertiary Education

At the secondary level, she noted that the Government’s plan to mandate seven years of high school attendance will allow students to be better psychologically prepared for tertiary education, and also reduce the number of years spent in tertiary institutions, thereby decreasing the cost for tertiary education.

She also noted that there were many students who were leaving high school young and psychologically unprepared for tertiary studies; therefore, the additional two years at secondary school should provide more development.

She said that the Caribbean Examination Council was asked to reconfigure the Caribbean Advanced Proficiency Examination to allow students to achieve at least 60 credits, as is required by the University Council of Jamaica.

“So if you can do your occupational associate degree, or general associate degree, and move into tertiary, what it means is that you’re moving through faster, [and] we [will] have more persons accessing tertiary education; hence, We are preparing for the Fourth Industrial Revolution,” Dr McLean opined.

Education system to be benchmarked against global standards.

She reiterated that, as part of the preparation, the country would, for the first time, seek a global review of the education system through an assessment by the Programme for International Student Assessment (PISA). That review will be conducted in 2021 to determine how well Jamaicans are meeting the global standard in mathematics, literacy and science education.

PISA is a global study, which is conducted by the Organisation for Economic Co-operation and Development, of education systems.

“The last review of the education system was about 2004. For us to be a competitive country, we must know where our children stand,” Dr Mclean informed.