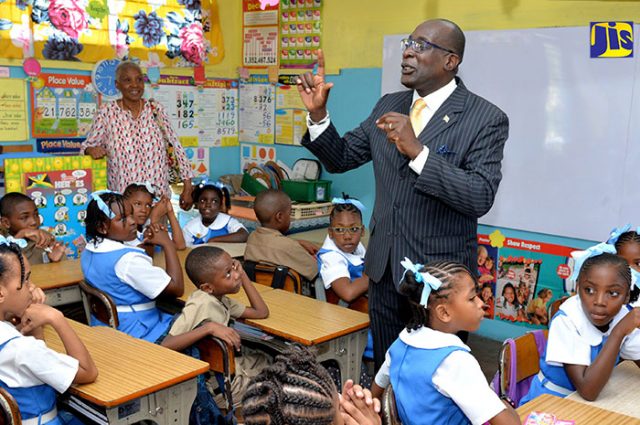 JIS: Minister of Education, Youth and Information, Senator the Hon. Ruel Reid, says the Government of Jamaica is willing to offer full scholarships to young people involved in crime and non-productive activities to enable them to pursue academics or skills training.

In an interview with JIS News at Excelsior Primary and Infant School in St. Andrew on Monday (September 3), during his tour of three schools at the start of the 2018/2019 academic year, Senator Reid said the Government is reaching out to these youth, through members of Parliament and government agencies that provide training opportunities.

“A part of my job is to make sure that our children have access to education to the highest level, and we have to work now with our members of Parliament, the Ministry of National Security and the community to now transition, to change the culture of violence,” he pointed out.

Senator Reid added that he wants to see more young people who engage in illegal activities take up training opportunities and become employed, thereby contributing as productive members of society.

“I know the members of Parliament have been encouraging many of these wrongdoers to come back to school and I am appealing to them, anybody… who is ready to go back to school. We want them to be educated and trained,” he said.

“The Government will make sure you have full scholarship to achieve your full potential, because we must transform Jamaica into a culture of productivity by the development of our human potential,” he noted.

In addition to Excelsior Primary and Infant, Minister Reid also visited Wolmer’s Boys and Jessie Ripoll Primary to observe their operations during the first day of school.

Minister Reid spoke with grade-six students at Jessie Ripoll and Excelsior Primary schools, who will be sitting the first Primary Exit Profile (PEP) examination next year, and encouraged them not to be fearful of the inaugural series of tests they will undertake.

CAPTION: Minister of Education, Youth and Information, Senator the Hon. Ruel Reid (right), offers words of encourgement to grade six students of Jessie Ripoll Primary School, during his visit to the instiution on Monday (September 3). Standing (at left) is Jessie Ripoll board chairman, Marcia Thwaites.