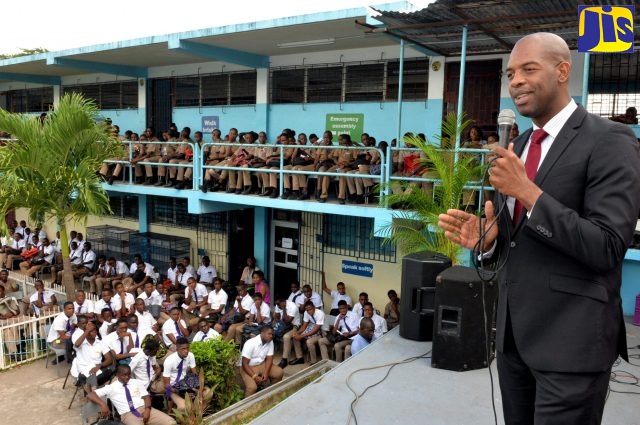 JIS: In an effort to boost the morale of its more than 60 per cent male population for higher academic performance, the Enid Bennett High School in St. Catherine has embarked on a series of motivational initiatives.

On Tuesday (October 30), the institution celebrated Boys’ Day, with several presenters taking the students through sessions looking at growing from boys to men, and making education a priority.

Senior Advisor in the Ministry of Industry, Commerce, Agriculture and Fisheries, Robert Miller, encouraged the students to always aspire to be high achievers. “Let us not lose our place in society,” he said.

He pointed to the unhealthy habit of young men wearing their pants very tight, and implored them to make themselves ready for the job market, or to set up their own businesses.

Mr. Miller said all the students should assert that they are at school to “obtain my education”.

Student, Orlando Sterling, who was recently recognised by the school for discipline, said he had idled with his schoolwork, and when he had to repeat grade 8, “it was the wake-up call that I needed to set my priorities straight”.

He noted that he changed his attitude towards school, and last semester he collected four awards and two certificates. “At the end of fifth form, I was able to pass eight subjects,” he said.

For his part, Senior Technical Director in the Ministry of Education, Youth and Information, Marlon Morgan, said students can achieve great things if they apply themselves in a responsible way.

The school has instituted an initiative called Triple B (The Bennett Boys’ Big-Up), where students are recognised for exemplary conduct.

“The initiative is quite timely; one that is relevant, and we look forward to it growing,” Mr. Morgan told the audience.

Pointing out the benefits of youngsters surrounding themselves with “positive people,” Mr. Morgan said they will get encouragement and guidance to go in the right direction.

“Your future is in education. When you come to school, don’t waste time, as it is time that can never be regained,” he emphasised.

Meanwhile, Guidance Counsellor at the school, Sheldon Huntley, told JIS News that the event, which will be held annually, is one of the many programmes that will be used to “teach the boys how to become good men”.

“The message has reached them, and they will make good use of what was said. We want to invest in our boys, and highlight the good-behaving boys, so that they can be models to the other students,” he said.

CAPTION: Senior Advisor in the Ministry of Industry, Commerce, Agriculture and Fisheries, Robert Miller, addresses the audience at the St. Catherine-based Enid Bennett High School on Boys’ Day, held at the institution on October 30.

Direct and open communication is fundamental to the Ministry’s communications programme. It also enables us to build relationships with our stakeholders and avert misunderstandings that will lead to ill will and a poor image of our Ministry.The Communications Unit manages...
read more