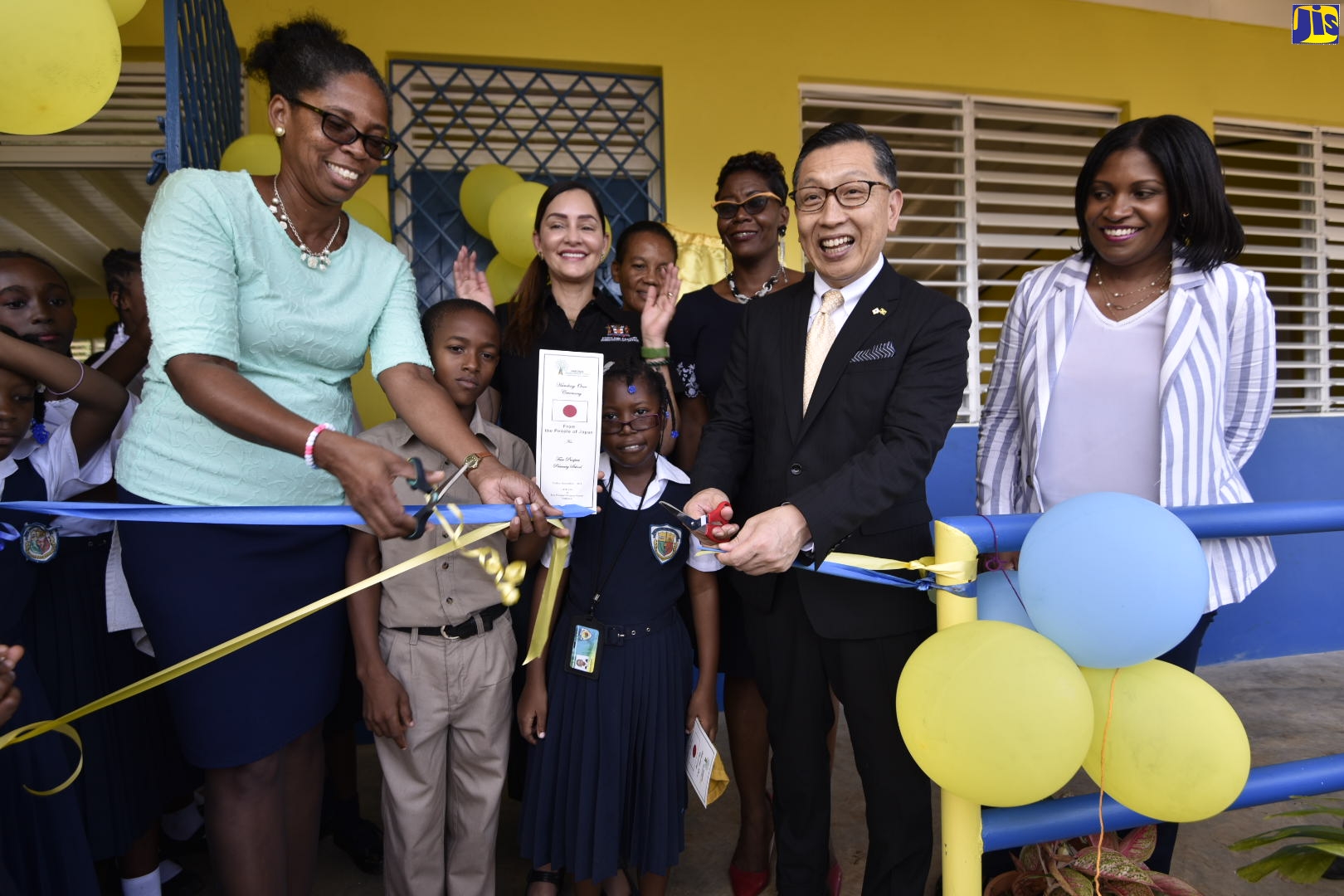 The National Education Trust (NET), in collaboration with the Embassy of Japan, has officially handed over two new classrooms, and replaced windows at Fair Prospect Primary School, in Eastern Portland, at a cost of approximately $11 million.

The ceremony took place on Friday (November 1), at the school.

With the case at Fair Prospect Primary, a Japan International Cooperation Agency (JICA) volunteer who was previously assisting with the teaching of mathematics at the school, brought the need for the classrooms and windows to the attention of the Embassy of Japan. Consequently, a site visit was conducted and on March 9, 2018, the school was selected for funding under the Grassroots Human Security Project.

Grade six teachers, Mrs. Jackquline Cameron Forbes and Mrs. Shernette Walker Bailey, who have been teaching at the school for 14 years and 23 years respectively, said it was difficult for them to prepare students for the Grade Six Achievement Test (GSAT) and PEP, because they did not have a classroom and the structures they were accommodated in, were deteriorating.

“Last year, I was displaced a lot. We had to move up and about, around and over. The library was once my classroom, and once there was a meeting, we had to move out and go somewhere else. We had to do well with the little we were given, but now I have a classroom, and I will be able to concentrate on my students and make teaching much better,” Mrs. Walker Bailey told JIS News.

“I’m very much grateful for that new building. We are really appreciative,” she added.

Director, Donor and Partner Relations, NET, Ms. Latoya Harris, said during the assessment, it was found that the environment the grade six students were being taught in, was not ideal.

With the new concrete structure and a more comfortable space, she is hoping the students will be more inspired and perform outstandingly in the upcoming Primary Exit Profile (PEP) exams.

“I’m going to be looking specifically for Fair Prospect’s results next year to see how they perform. It is important that we create an environment in which they can flourish… We hope they will take care of this new facility,” Ms. Harris said.

Ambassador of Japan in Jamaica, His Excellency Mr. Hiromasa Yamazaki, said his country decided to invest in the infrastructure at the school, as education is important.

“In tandem with our goals, we realise that Fair Prospect Primary School aims to improve the education standards for its students and that is why our Embassy decided to provide funding for the construction of a building to create more space for students to reduce the problem of overcrowding,” he said.

“It is Japan’s hope that the new facility will ultimately strengthen the teaching and learning environment for students, teachers and other staff at this noble institution of learning,” he added.

Acting Principal, Ms. Avril Neufville, thanked the donors on behalf of the 127 students and 11 teachers at the school.

On April 20, 2015, the Embassy of Japan in Jamaica and NET formed an alliance to collaborate on education development projects. This partnership is aimed at meeting primary education needs at schools with the greatest need of assistance.

Under this partnership, NET identifies schools in need of critical assistance and submits same to the Embassy of Japan for consideration under the Grassroots Human Security Project. Through this project, the Government of Japan offers financial assistance for development projects designed to meet the diverse needs of developing countries.

The Grassroots Human Security Project has provided funding in the amount of approximately $1 billion for 109 projects across Jamaica from  1995 up to March 2018.