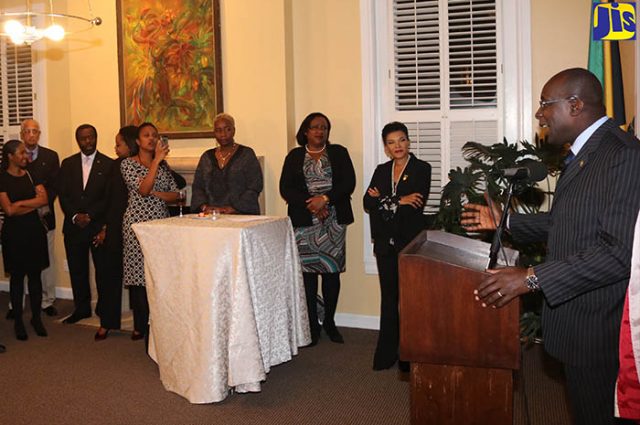 JIS: Education, Youth and Information Minister, Senator the Hon. Ruel Reid, has called on the Jamaican Diaspora in the United States to partner with Government in establishing a national school bus service.

He said the Ministry is looking to acquire 100 school buses over the next five years, and encouraged the Diaspora to match this target.

The Minister was addressing members at a reception hosted in his honor by Jamaica’s Ambassador to the United States, Her Excellency Audrey Marks, at the Jamaican Embassy in Washington, D.C. on November 10.

Noting that he envisioned a transportation system “that will take our students from home to school and back”, Senator Reid said the input of stakeholders, like the Diaspora, is pivotal to achieving this.

He argued that the service will go a far way in reducing student absenteeism and lateness which he attributed to the lack of a reliable school bus service and parents’ inability to afford public transportation costs.

Senator Reid assured that the initiative will be rolled out in the rural parishes where students “will benefit from the same level of subsidies enjoyed by (their colleagues) who use the Jamaica Urban Transit Company buses.”

While lauding members of the Diaspora and alumni associations for their ongoing contributions to the education sector through scholarships and other assistance to their alma maters, Senator Reid said it was also an opportune time for them to give consideration to other aspects of the sector such the construction of schools.

He indicated that although the education system requires 100 new schools over the medium term to long term, there is an immediate need to build 17 new institutions at a cost of $13 billion dollars.

Senator Reid advised that the Government has a four-year education budget from which five new schools will be built next year, and invited the Diaspora to, as best as possible, assist with the construction of the others.

CAPTION: Education, Youth and Information Minister, Senator the Hon. Ruel Reid (right), addressing members of the Jamaican community in Washington, D.C,, during at a reception held in his honour by the Embassy of Jamaica on November 10. Looking on (at 2nd right) is Jamaica’s Ambassador to the United States, Her Excellency Audrey Marks.