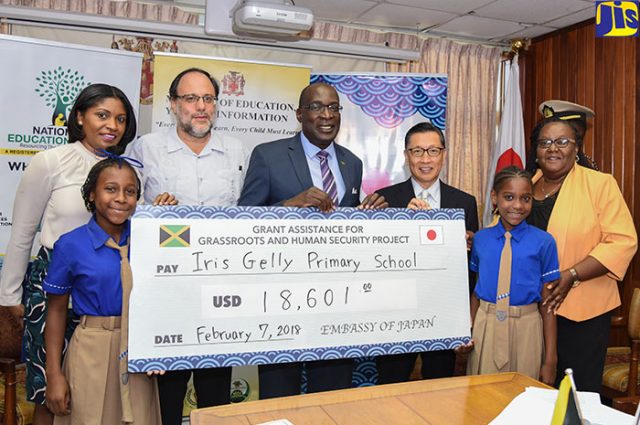 JIS: The Government of Japan has provided grants totalling $10 million to fund development projects at the Buff Bay and Iris Gelly Primary schools.

The provision of $8 million to Buff Bay Primary in Portland will be used to purchase a bus for the institution.

Iris Gelly Primary School in Kingston received $2 million towards the installation of a water harvesting and sanitation solution.

Both allocations have been provided under the Japanese Government’s Grant Assistance for Grassroots Human Security Project and initiated through a partnership forged between the National Education Trust (NET) and the Japanese Embassy in Jamaica.

Agreements formalising the provisions were signed by Education, Youth and Information Minister, Senator the Hon. Ruel Reid, and Japan’s Ambassador to Jamaica, His Excellency Hiromasa Yamazaki , on February 7 at the Ministry’s Heroes Circle offices.

Senator Reid said Jamaica and Japan have signed a number of similar agreements in recent years, which is indicative of the strong bilateral relationship both countries have enjoyed since 1964.

He welcomed the provision of a bus for the Buff Bay Primary School, adding that it will contribute to the development of the rural school bus system.

“We have seen…the provision of a dedicated school bus service, making a difference in the attendance and punctuality of students, so this is most welcomed. We have about 7,900 [students] who are beneficiaries of this new Government initiative, born out of the fact that we are not pleased that we have a national average of 20 per cent of our students who are regularly absent from our schools in some areas,” Mr. Reid said.

The Education Minister explained that the survey of living condition shows that 42 per cent of parents, whose students are regularly absent from school, indicate that they have a challenge in finding bus fares to send their children to school.

“Therefore, our Ministry is now focused on ensuring we have a national programme to make sure that those vulnerable households and children get Government support,” he added.

For his part, Ambassador Yamazaki, said he is pleased that the Grant Assistance for Grassroots Human Security Project continues to support small-scale projects, especially in the areas of health and education. He added that he looks forward to visiting both beneficiary institutions.

Meanwhile, Principal of the Buff Bay Primary School, Karl Coke, said the new bus will transform the attendance pattern of his students.

“Buff Bay Primary School had an issue with students traversing from rural areas where transportation to and from school was, for the most part, inadequate. In addition to this, transportation, especially in rural Jamaica, continues to be a safety risk for students,” Mr. Coke said.

He added that the provision of the bus will help to mitigate this, by providing safe and reliable transportation for the children.

Principal of the Iris Gelly Primary School, Veronica Gaynor, said both schools “will never be the same because we are securing pupils’ lives, harnessing [their] skills, abilities and talents.”