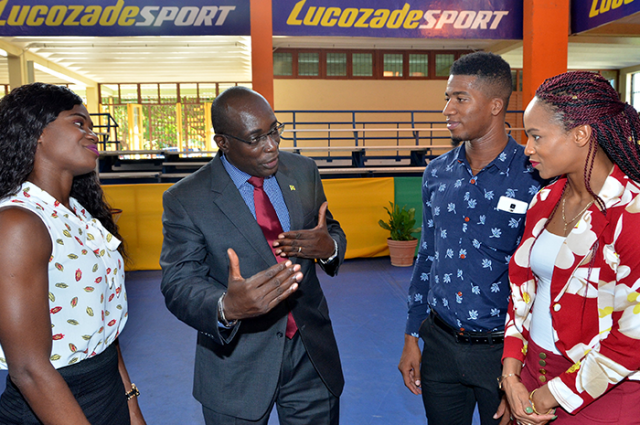 JIS: The Government will stand surety for tertiary-level students having difficulty identifying a guarantor for a loan from the Students’ Loan Bureau (SLB), under the condition that they are enrolled at a teacher-training institution and are willing to be bonded for five years.

This was disclosed by Minister of Education, Youth and Information, Senator the Hon. Ruel Reid, while speaking at a reception in honour of G.C. Foster College athletes, at the institution in St. Catherine on September 21.

Mr. Reid noted that while the Government is unable to offer free education beyond grade 13, it is committed to assisting tertiary-level students with accessing funding for their studies.

“What we are guaranteeing is that through the SLB or other programmes, such as Jamaica Values and Attitude Project (JAMVAT), the support from the Ministry of Labour and Social Security, and other donors in terms of bursaries and scholarships, that you are funded for your tertiary education,” he said.

In the meantime, the Minister congratulated the athletes being honoured during the ceremony. They had participated in the International Association of Athletics Federations (IAAF) World Championships in London this year.

He noted that they are “outstanding ambassadors for Jamaica and G.C. Foster College”, pointing out that despite the challenges faced, they represented the country well “and we are very proud of all of you”.

Ten athletes from the G.C. Foster College/Sprintec Track Club were selected for the Jamaican team to the IAAF World Championships. The group formed the largest representation from any one institution in the country.

The group, dubbed the ‘Super 10’ by the college, was responsible for two of the four medals won by the Jamaica team at the championship. All 10 members made it through to at least the semi-final round of the event.

Ristananna Tracey got a bronze medal in the 400 m hurdles; while Jura Levy and Natasha Morrison formed part of the 4x100m women’s relay team that copped a bronze medal for Jamaica.

Another four personnel who accompanied the team were also honoured. They are Maurice Wilson Sean-Michael Samuels, Nathaneal Davis, and Romario Barrett.

CAPTION: Minister of Education, Youth and Information, Senator the Hon. Ruel Reid (second left), raps with G.C. Foster College/Sprintec Track Club athletes during a reception held in their honour at the campus of the G.C. Foster College in St. Catherine on Thursday (September 21). The athletes (from left) are Anneisha McLaughlin-Whilby; Demish Gayle; and Anastasia Le-Roy. They were among 10 athletes who were presented with plaques in recognition of their performance during the International Association of Athletics Federations (IAAF) World Championships in London this year.